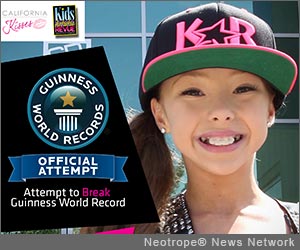 SAN DIEGO, Calif. /eNewsChannels/ — 10-year-old dance prodigy and featured performer on the hit TV series on Lifetime, “Dance Moms,” Sophia Lucia, will attempt to break the Guinness World Record of “36 Consecutive Pirouettes” on March 30, 2013 in her home town of San Diego. The event will take place at San Diego Dance Centre, where Sophia started dancing at the young age of 2.

An official adjudicator from Guinness World Records, Philip Robertson will be on hand to witness Sophia’s attempt to break the current record for the most consecutive pirouettes, which was set by Alicia Clifton (USA) completing 36 pirouettes at the “Applause Studio” in Oklahoma, USA on December 9, 2005.

Sophia says: “I am very excited for this opportunity and it’s my mom’s birthday on the 31st, so I hope to give her an early present by breaking the record.”

“Watching her grow up competing with her amazing talent,” said Owner of KAR, Noah Lands. “I’m honored to help Sophia with her Dream.”

“We are thrilled to help Sophia with this incredible opportunity and are proud to have this amazing dancer – and fashionista! – a part of our California Kisses team. There is no doubt that this partnership will bring on an incredible year in the world of dancewear!” said Angela Chittenden of California Kisses Dancewear.

“Her ability, poise and presence on stage is incredible and if Dance was in the Olympics, Sophia would be a Gold Medalist,” says the Producer of KARtv & KARtv Dance Awards, Joe M Loera.

Kids Artistic Revue ( http://dancekar.com/ ), America’s Favorite Dance Competition, is excited to enter its 31th season! KAR was established in 1982 by Noah R. Lands to provide an outstanding outlet for dancers and choreographers to showcase their talents in the Los Angeles Area. Over the years, KAR has grown from 1 day regional competitions to hosting 3 day regional events with multiple venues each weekend across the nation. KAR has also expanded their Grand National Finals to four beautiful locations: Las Vegas, Myrtle Beach, Panama City and Toledo. KAR is proud to be one of the oldest and most successful competitions in the industry!

Dreamed up and designed for the little glam girl, California Kisses ( http://www.californiakisses.com/ ) brings west coast inspired fashion to the world of dance. From ballet twirls to contemporary thrills, California Kisses is designed to show off your tiny dancer’s individual personality and creativity both on and off the stage. In 2013, California Kisses has teamed up with young dance prodigy, Sophia Lucia, to introduce the Sophia Lucia for California Kisses Collection. With fun and fresh styles created in dainty silhouettes and luxury fabrics, the brand sets out to make every little dancer look and feel like a star. Better yet, it’s all made in California with Love and sealed with a Kiss!”

COVID Dance MUSIC VIDEO from TIPZY About Safety During a Pandemic Oct 1, 2020