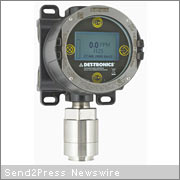 Because the FlexVu Universal Display provides non-intrusive magnetic calibration and configuration, a single person working alone can calibrate gas detectors without declassifying a hazardous area. In addition, the FlexVu display has been third-party performance tested and certified to FM, CSA, and ATEX/IEC. Its reliable construction has an explosion-proof rating and is approved for use in Class I, Division 1, Groups A, B, C, and D classified hazardous areas for all gas types.

Taking advantage of its flexible installation options, users can couple the FlexVu display directly to a single sensor or place it remotely using a sensor termination box. Outputs include analog 4-20 mA with HART, three alarm relays, one fault relay, and RS-485 Modbus.

In its current release, the FlexVu UD10 display operates with the following Det-Tronics gas detectors/sensors (additional gas and flame detectors will soon be added):

Det-Tronics is part of UTC Fire & Security, which provides fire safety and security solutions to more than one million customers around the world. Headquartered in Connecticut, UTC Fire & Security is a business unit of United Technologies Corp., which provides high technology products and services to the building and aerospace industries worldwide. More information can be found at http://www.utcfireandsecurity.com.

Forensics Detectors works to solve both challenges with the recent launch of its first carbon dioxide (CO2) monitors Jan 6, 2021