H.A.M. started in 2002 as a small production studio. Since then, it has grown into a multi-faceted entertainment company that includes production, mixing, web design, promotions, artist development, distribution, songwriting and film scoring. 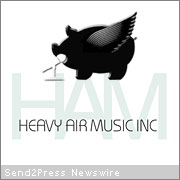 With an arsenal of talent and a fresh new take on the relationship between fans and artists, this new independent plans to take the industry by storm.

Javier, also a Grammy(R)-award winning mixing engineer, focuses on keeping all aspects of production in house.

“We do very little outsourcing to keep quality consistent,” he says. “We have a very talented staff.”

H.A.M. has contributed to many Grammy-winning and nominated albums. Past clients include: Barbara Streisand, Brian McKnight, Gladys Knight, Barry Gibb, and more.

Tiangco has an edge that few mainstream pop stars possess. Singer, songwriter, producer; her work has an imaginative spirit that is captured in every song. The EP is currently available on iTunes(TM); the video will be available late summer.

According to H.A.M., Tiangco will be the flagship artist for H.A.M.

The company has also recently signed on with Mystic Urchin and the nation’s largest independent distributor, Ryko Distribution. Tiangco was the first artist to be released under this new partnership.