BALTIMORE, Md. — A solemn candlelight commemoration and lighting of the International Holodomor Remembrance Torch was held in Baltimore on May 29, 2008 to raise awareness and commemorate the 75th anniversary of Ukraine’s genocide 1932 – 33. This horrific man-made famine (holodomor), orchestrated by Josef Stalin to bring about forced collectivization, starved to death 7 – 10 million Ukrainians. The commemoration took place in front of Baltimore’s City Hall at the War Memorial Plaza and was organized by the Holodomor Committee of Baltimore.

The International Holodomor Remembrance Torch started its journey in Kyiv, Ukraine. It was first lit by the president of Ukraine Victor Yushchenko and will travel through 33 countries throughout 2008. Similar remembrance events have already taken place in cities across the United States. After Baltimore, the Torch will travel to Washington DC, the last leg of the Torch’s tour of 23 U.S. cities, before reaching Ukraine in November 2008 to be part of the official state commemoration of the 75th anniversary of Ukraine’s Genocide of 1932-1933. 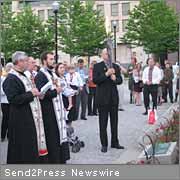 Mayor Sheila Dixon declares May 29th “Ukrainian Genocide Remembrance Day in Baltimore,” and calls the Holodomor “among the worst cases of man’s inhumanity towards man.”

Speakers at the event included Mr. Jerome Stephens, a representative from Senator Ben Cardin’s (D) office and Ms. Anna White from Mayor Sheila Dixon’s office, who issued a Proclamation designating May 29th 2008 Ukrainian Genocide Remembrance Day in Baltimore. The Proclamation went on to say that, “Seventy five years ago, under the leadership of Josef Stalin, the Soviet regime committed an act of genocide against the Ukrainian nation by using food as a weapon to systematically murder up to 10 million men, women and children. In sheer numbers, this tragedy ranks among the worst cases of man’s inhumanity towards man.” Councilman Jim Kraft also spoke to acknowledge this tragic event in Ukraine’s history.

The Deputy Ambassador of Ukraine Viktor Nikiczuk was also in attendance, and spoke to the 200 people gathered at City Hall about the importance of broadening awareness of this genocide beyond the Ukrainian community, and committing the support of the Government of Ukraine to the building a memorial in Washington DC.

The keynote speaker, Mr. George Krywolap the grandson of a Holodomor survivor, gave a moving reading of his grandfather’s account of the anguish of starving peasants, who had to turn over their harvest of wheat to armed militia, then flocked to the cities in search of food. He spoke of a mother who in desperation unwittingly fed her children the poisonous flowers of the acacia tree, and how the death wagon picked up their bodies – along with many others, some not yet dead – the next morning for mass burial. Mr. Krywolap’s grandfather was a railroad worked, and witnessed desperate peasants clamoring onto trains heading out of the country, only to have their cars decoupled several miles out of the city. He also talked about how his grandfather and father, then a six year old boy, survived by sharing the one bowl of thin radish soup allotted to workers of the railroad each day.

The event also included a brief lecture by the leading Holodomor historian Dr. Stanislav Kulchytsky, professor of Ukrainian history and head of The Ukrainian Historical Society in Kyiv, and a speech by Mr. A. Chornodolsky, a member of local Ukrainian community, who in his address also commemorated other horrific genocides, including the Holocaust, the Armenian genocide, the Rape of Nanking, Rwanda, Darfur, and others. He implored the crowd to “remember the dead,” and declared that the Holodomor slogan “We will never forget” must serve to prevent such a human tragedy from occurring in the future.

The attendance at the commemoration included over 200 from Baltimore’s Ukrainian-American community, many in traditional embroidered shirts, as well as members of the youth scouting group Plast and youth group CYM. In addition to the candlelight vigil and Torch lighting, a special memorial prayer service was celebrated by priests from Baltimore’s Ukrainian Catholic and Ukrainian Orthodox parishes.

Ukrainian Genocide by Famine (Holodomor) 1932-33
The Holodomor was a genocide by famine, perpetrated by the Soviet regime in 1932-33 during Josef Stalin’s brutal reign against the Ukrainian populace. It was orchestrated with the aim of bringing about forced collectivization of Ukraine’s farms and Sovietization of the Ukrainian people.

As part of its campaign against the Ukrainian people, the Communist Regime confiscated all the grain produced by Ukrainian farmers, withheld other foodstuffs, executed anyone trying to obtain food, and punished those who attempted to flee. The result: in the land called the Breadbasket of Europe, up to 10 million men, women, and children were starved to death. This horrendous act of genocide against the Ukrainian people is known as the Holodomor – murder by starvation.

At the height of the man-made famine, Ukrainian villagers were dying at the rate of 25,000 per day, or 17 per minute. More than 20% of the population of Ukraine died as a result of the famine. At least three million of the victims were children.