BEVERLY HILLS, Calif. — Linbrook Press announces a new novel, “The Dawn of Saudi” (ISBN: 978-0977-978-014), authored by Homa Pourasgari, scheduled to be released June 22, 2009. Homa had a desire to write a novel that would depict what life is like for women in Saudi Arabia. The Dawn of Saudi combines real-life turmoil with a fictional tale. “Many Muslim countries look to Saudi Arabia for cultural and behavioral guidance,” Homa says. “That’s why it was important for me to have Saudi Arabia at the heart of this novel. We must start there to implement change.” 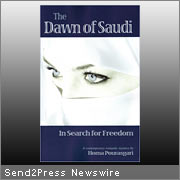 The Dawn of Saudi is a mystery that examines the lives of three people. The underlying story that surrounds these three characters depicts the oppression of women and the abuse of human rights under the pretext of religion.

In Riyadh, Saudi Arabia, Sahar Al-Hijazi fights for her rights and refuses to submit to the constraints and oppressions of a society where women are given no respect or power.

Dawn Parnell, Sahar’s best friend, is not as forthright. She changed her religion and married a Saudi who she believed was forward thinking; she was misled. Both women seek a voice in a society that provides them none.

In Pasadena, California, Crawford Enterprises has strong business ties to the Al-Hijazi family. Wealth and greed are at the company’s core; women’s rights mean nothing.

With Andrew Crawford at the helm, and his son Jason close beside, Crawford Enterprises has grown to be a well-recognized business in the global marketplace.

However, as Jason begins to closer examine the Saudi way of life, he begins to wonder about and question his personal beliefs, morals and ethics. Is he willing to sell his soul for a profit?

The lives of Jason, Sahar, and Dawn soon begin to intertwine, creating a platform for international intrigue. Readers will learn about a place where crushing the female spirit and torturing foreigners from third-world countries are all too commonplace.

“The Dawn of Saudi” is listed in Bowker’s Books In Print and will be available for purchase at major online bookstores including Amazon.com. For additional information, visit http://www.thedawnofsaudi.com.

Author speaking engagements, signings, or interviews can be arranged.

Pyramid Press announces ‘The Adventures of Steamo The Wonder Crab’