MOUNTAIN LAKES, N.J. — Today the LTC Guild announced the “3 in 4 Need More” campaign to promote affordable long-term care insurance for all Americans. “Health reform will have a big hole in it,” says Jonas Roeser, a founding member, “if it doesn’t embrace the extended-care needs of today’s longer-living Americans.” The new “3 in 4 Need More” campaign will seek to raise public awareness of the need for long-term care insurance, mobilize support for new tax incentives to make the insurance more affordable, and press for Medicaid reform to reserve public aid for the truly needy. 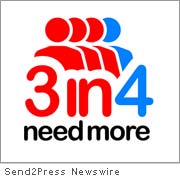 The LTC Guild plans no direct advertising or promotional campaign of its own, but instead will make the “3 in 4 Need More” logo and other visuals available for use by its members. Membership is open to concerned citizens and all those who are professionally involved in long-term care, including LTC insurance agents; care providers; financial advisors; elder-law attorneys; and executives of insurance agencies, carriers, nursing homes, retirement communities, public health agencies, public-advocacy groups, and other organizations.

“Most of our health costs occur in the later years of life,” Roeser says, “so it would be a huge mistake to neglect the long-term care component. Today only about 10 percent of those who could benefit from LTC insurance have it.”

Driving the point home, he asks, “Do you plan to live beyond 65? If so, reflect on this: According to the U.S. Department of Health and Human Services, ‘At least 70 percent of people over age 65 will require some long-term care services at some point in their lives’ (www.longtermcare.gov). That’s about three in every four of us!”

What about the proposed public option for long-term care, now before Congress? Dick Samson, who manages the LTC Guild, says, “We’re officially agnostic about that. Most of our members, I believe, doubt it’s the best way to go, but applaud the desire to make extended care more widely available.”

If the public option passes, “it will most likely provide very basic coverage only,” Samson says. “To handle all their care needs, most Americans will still need private LTC insurance — instead of the public option or to supplement it. The ‘3 in 4 Need More’ campaign will make that clear.”

“Companies wishing to protect the productivity and retirement savings of employees are also welcome,” says Samson. “If they join the Guild like anyone else, they can just download the materials.”

Any LTC Guild member may request the use of the logo or other visuals. It costs nothing to join the LTC Guild, at — www.ltcguild.com.

The “3 in 4 Need More” slogan is available without charge to LTC Guild members for uses that support getting this message out. Roeser, who came up with the basic idea, is Senior Vice President of Marketing & Operations of LTC Financial Partners, LLC (LTCFP), one of the nation’s leading long-term care insurance agencies. Roeser also worked with Samson to found the national LTC Guild, and his company contributed funds to create the “3 in 4 Need More” logo and other visuals.

“LTCFP is pleased to support the LTC Guild as well as the public in this important effort,” says Roeser. His company intends to use the “3 in 4 Need More” materials in company promotions, and to encourage others in the industry to follow suit. “Among other things, we plan to integrate the logo and message into our Long Term Care Outreach and Education Program (LTCOEP(TM)),” he adds. “This will help employers educate their people on the critical importance of protecting themselves.”

“We expect the industry-wide campaign to start small and then grow fast,” says Samson. “Our LTC Guild members are media-savvy, and I think we’ll soon see ‘3 in 4 Need More’ all over the Net and on T-shirts, radio, TV.”

About the LTC Guild

The LTC Guild is a social network described as “The place where long term care and allied pros meet one another and the public, form local chapters, schedule meetings, and share information.” National in scope, the social network serves a growing number of local LTC Guilds. Each “local” is an independent entity established and run by individuals in a geographic or interest area. Members of the national LTC Guild need not belong to any “local,” however. The national site and social network are run by Dick Samson, Director of the EraNova Institute of Mountain Lakes, New Jersey. More information: www.ltcguild.com.

All referenced product names, and other marks, are trademarks of their respective owners. Send2Press(R) is the originating wire service for this story, Copr. 2009.