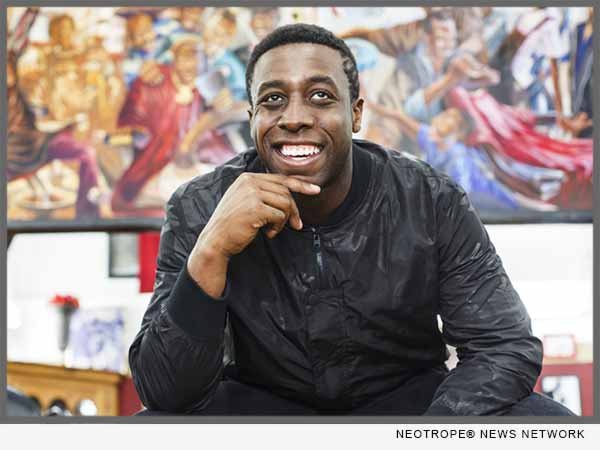 The Mugadi Foundation, in association with Waynflete School, is proud to announce a Michael O. (Michael Odokara-Okigbo) benefit concert event “ON MY OWN” to take place July 13, 2017 at the beautiful Westbrook Performing Arts Center in Westbrook, Maine.

The 6 p.m. concert will serve as a fundraiser for the Mugadi Foundation, with shared proceeds going to support a financial scholarship fund in Michael’s name at Waynflete School, specifically in support of tuition for students from resettled refugee families.

The concert will also serve as a preview for Michael’s new music, which is being released all throughout 2017. Tickets for the fundraising event are $25 and all of the proceeds will benefit the two programs.

Well known and respected Portland radio personality Lori Voornas from Q97.9 will emcee the event, which will also feature an opening set of music from popular local jazz/funk trio Micromasse.

EVENT TICKETS:
Tickets to this exciting performance will be available on Brown Paper Tickets for $25 beginning June 15, 2017 at: http://michaelo.brownpapertickets.com or 1-800-838-3006

The mission of The Mugadi Foundation is to help children and young adults around the world, particularly in the Global South. The Mugadi Foundation was founded by Michael Odokara-Okigbo when he was 14. Mugadi (which means “I will live” in the Igbo language) is a 501(c)(3) organization created in 2004 to help pay for the school fees granted to orphanages located in Lagos, Nigeria. The foundation was established due to a trip he made with his mother to an HIV/AIDS orphanage in November, 2004.

Odokara-Okigbo was shocked with how much trouble they had finding for education, but most interestingly to him, he was surprised to see how similar these children were to him. When he returned, he decided to make a difference in those children’s lives, he created a photo exhibition of fourteen stories, and showed it in hospitals, schools and museums. It was a huge success, and prompted him to create the Mugadi Foundation.

Waynflete is an independent, co-educational day school in Portland, Maine, serving students from preschool through grade 12. The Waynflete mission is to engage the imagination and intellect of our students, to guide them toward self-governance and self-knowledge, and to encourage their responsible and caring participation in the world.

The school aims to provide a program that combines security with challenge, playful exploration with rigorous expectation and range of experience with depth of inquiry. Waynflete believes diversity is a condition of excellence and several years ago made a commitment to enroll as many students from Portland’s resettled refugee community as possible. Michael joined the Waynflete community in 2002 and graduated in 2008.

Michael O. (Michael Odokara-Okigbo) is a singer, songwriter, performer and producer who harnesses his personal and cultural influences to create a powerful sound all his own. Born in 1990 and raised in Portland, Maine, Michael’s upbringing fused with his international exposures, as an American, African American, and African culture to create the multi-faceted artist he is today.

In 2008, Michael was accepted to Dartmouth College, where he double majored in Global Health and History. He led The Dartmouth Aires to a second place finish on NBC’s “The Sing Off.” With over 6.5 million viewers weekly, Michael wowed audiences and was even dubbed “incredible” and “timeless” by Ben Folds of Ben Folds Five, and “a freaking superstar” by Boyz II Men’s Shawn Stockman. After graduation, Michael moved to Los Angeles and released his first EP, “In the Beginning,” in 2013. Within 24 hours of its official release, “In the Beginning” jumped to the top 5 on the iTunes R&B charts, and was the best-selling EP in Northern New England for 2013.

In 2015, Michael O. appeared in the major motion picture, “Pitch Perfect 2,” as the lead singer of the singing group in the film, The Singboks, soloing on the song “Anyway You Want It” that was featured on the soundtrack, which won an American Music Award for best soundtrack. Both the film and soundtrack were #1 in May of 2015. Michael has performed all over the world, including appearances at Merrill Auditorium, The Lincoln Center, and in 2014, at the White House singing for President Obama. Michael O. is an international performing and singing star. A power house performer in his right, Michael O. aims to expand his reach, both in content and in form, creating a unique entertainment experience that brings people together through the power of his music and entertainment. Michael’s canvas is a stage, and he aims to paint the image that, “as people, we are more alike than we are different.”

Beginning in May 2017, Michael will be releasing new singles from his CD “ON MY OWN” and performing nationwide and in international locales.