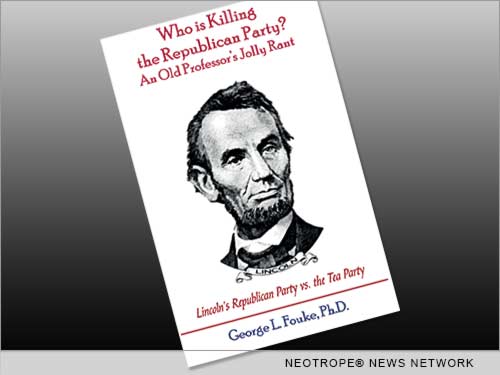 ORLANDO, Fla. /eNewsChannels/ — NEWS: Is the Republican Party planning a coup d’etat for the 2014 election cycle? George L. Fouke questions this in his newly-released book, “Who is Killing the Republican Party? An Old Professor’s Jolly Rant” (ISBN: 978-1502512499). In a satirical account of the GOP, this politically-independent author takes the Republican Party to the woodshed with tough love hoping for its revival as part of a viable two-party system.

Fouke says that it’s appalling to see what has happened.

“The Republican Party has lost contact with Abraham Lincoln’s concern for everyman and it’s killing the party,” he says. “Party leaders seem intent on stopping at nothing, even a political coup, to prevent the sharing of power.”

In this book, Fouke compares Lincoln’s Republican Party to today’s Tea Party through a satirical approach that is entertaining and humorous, but calls for reform.

Topics include: the dark side of President Reagan’s revolution; the founding fathers’ tax citizenship versus today’s tax norquistism; corporate fear of the humanities; Caucasians camouflaged as Christians panicking over Pat Buchanan’s book about immigration as they once did over slavery; Who the Tea party is really mad at; wealth accumulation versus purposeful manipulation; Harvard’s unintentional creation of a “Hasty Profits Club” to go along with the “Hasty Pudding Club,” and more.

Fouke believes that Judeo-Christian heritage properly values wealth, but requires it be used for the general welfare of everyman.

“We’re at a tipping point. With their next votes, Americans will choose to have a society of wealth or a society of moral purpose,” he says. “If I can excite the ‘on-the-fence’ voter to recognize how the Republican Party’s abandonment of Lincoln’s values has reduced everyman to a primitive, job hunter-gatherer nomad and vote for the ‘accumulate-wealth-and-use-with-purpose’ side, I’ve accomplished my mission.”

“Who is Killing the Republican Party? An Old Professor’s Jolly Rant,” is available in e-book format for Kindle and Nook and in paperback at: http://www.amazon.com/dp/B00NX027FU for a pre-election price of $1.99.

Fouke has prepared a list of 37 talking points and welcomes any open discussion with journalists and other interested media. A PDF file is available upon authorized request.

George L. Fouke is a retired political science and interdisciplinary studies professor who has also authored: “Damn the Warocracy: A Plea to Restore American Democracy,” and “A Global Strategy for Survival: Lessons from the Jewish Experience.”

Fouke writes from his retreat, the “Tree House” in Bat Cave, N.C., and lives with his wife in Indialantic, Fla. His favorite author is Thomas Wolfe, for his undying belief in the promise of America.