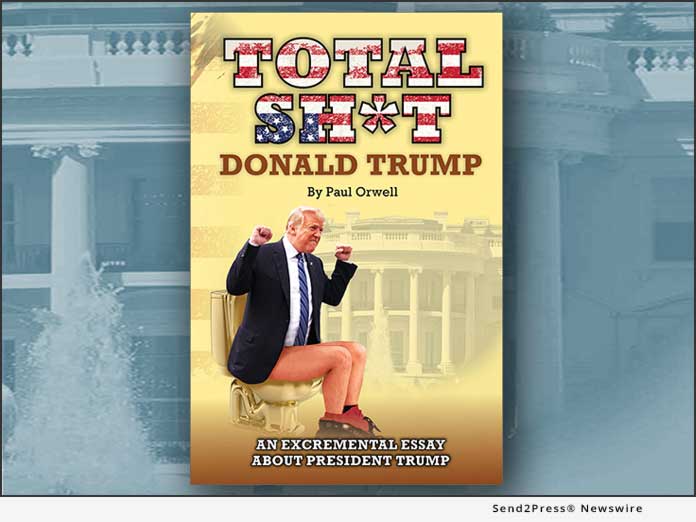 (WASHINGTON, D.C.) — NEWS: Author Paul Orwell’s new book “Total Sh*t Donald Trump” (ISBN: 978-1733807302; ppb; Oceania Press) released today on Amazon, Barnes & Noble, Apple and many other platforms, makes the case that the president is, in a sense, “the physical embodiment of our nation’s collective excrement” and that “we citizens have a duty to flush it, not just shovel it.”

While Orwell acknowledges that Trump is consistently inconsistent unlike any other President before him, he asserts that Trump is a conscious, committed and unapologetic turd.

* Hundreds of phrases of Trumpspeak in a “sh*ttery” at the back of the book. “Trumpspeak” is POTUS 45’s version of Newspeak from namesake George Orwell’s book “1984.”

* Reasons why many Americans think the President’s sh*t doesn’t stink. Not a matter of olfactory glands but a matter of mental avoidance, delusion and the collective suspension of disbelief.

* Advice to all Americans as to how to help evacuate Trump from the American body. A simple step remedy is described, which would make a timely and effective laxative for the U.S.A.

* (and much more, uncensored!)

“The general public is not as comfortable as Don is in the land of lying, litigation, exaggeration and misinformation, which gave Trump great advantage through the election,” says author Paul Orwell. “But in November 2020 the electorate will have a chance to get toilet plungers out and give politicians their quadrennial cleaning at the ballot box.”

Land of the Free:
“Total Sh*t Donald Trump” is published by Oceania Press today as a free eBook at https://pr.bookfunnel.com/gqcknk.

Available in Print:
The book is available for purchase for $5.95 in paperback from major booksellers; and available in Kindle and print at Amazon at https://www.amazon.com/dp/B07QMSX3WD. It contains 82 pages.

About the Author:
Paul Orwell is the author of “Total Sh*t: Donald Trump,” a satirical essay about our president that uses “sh*t” as a metaphor to describe Trump, and the book “SAD! Donald ‘Biff’ Trump Is President,” which catalogs the striking similarities between Donald Trump and the bully Biff Tannen from “Back to the Future II.”

Orwell is a businessman and writer living in Washington, D.C. who believes that Dirty Don is soiling America and that regular Republicans and Democrats have much more in common than Big Media wants them to believe. He fervently hopes that once the “Trumpster fire” has been extinguished, America can heal again.