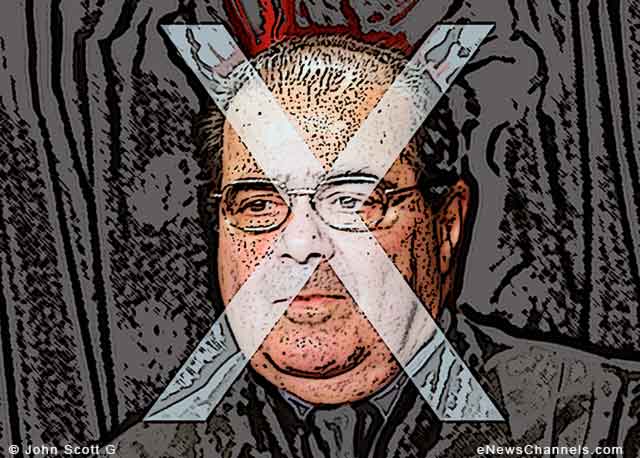 Note: Hold off on your rejoicing: Antonin Scalia is still alive. But since he is obviously brain-dead, we present this pre-eulogy.

No moment of silence is needed for Antonin Scalia, the recently-departed piggish and thuggish former Supreme Court justice. Never mind the admonishment to refrain from speaking ill of the dead; the disposal of human detritus is cause for celebration.

Among the malignant tumors appointed to the Supreme Court by troglodytes Ronald Reagan, George H.W. Bush, and George W. Bush, none was as disgusting as Antonin Gregory Scalia (March 11, 1936 to TBD).

As penance for the harm Scalia has caused humanity, the remains of his soul are now residing in hell. His still-conscious form is currently being flayed alive and slow-roasted on a titanium spit. That is the destiny of every conservative, of course, but considering the perfidy of Scalia, he will be suffering his fate on a daily basis for the next 666 years.

Like all right-wing pieces of excrement, Scalia held despicable views. This is a rodent who once referred to the 1965 Voting Rights Act as a “racial entitlement.”

Let’s take a few shroud-covered moments to consider some of the clown’s other anti-American views:

* In Citizens United, the most disastrous Supreme Court decision in the modern era, Scalia voted to help erode the democratic process by ruling that corporations have the same speech rights as people. Money became the equal of a bacteriological infection in the U.S. political system.

* In the Bush v. Gore case — the second most disastrous modern Supreme Court decision — Scalia and his conservative cronies wrongly bestowed the presidency on George W. Bush and the nation is still trying to climb out of the debt hole and Mid-East conflagration that resulted from that.

* Scalia once stated that Americans have no federal constitutional right to vote for president.

* Scalia wrote an opinion that incorrectly claimed the Second Amendment included the personal right of keeping a handgun in the home.

* After the Brady Bill instituted a national system of background checks for gun buyers, Scalia wrote that states didn’t have to participate in that system.

* Regarding the Constitution, Scalia was an asshole. Oops, let me put that differently. He was a textualist — one who is deluded into ignoring the profound changes in the world since the late 1700s while attempting to divine the Constitution the way the founders originally intended.

* Along with the Uncle Tom on the bench, Clarence Thomas, Scalia has taken part in the Koch brothers’ anti-American secret fundraising network. Both of them refuse to recuse themselves from cases involving the Koch empire.

* At one time or another, Scalia has equated homosexuality with bestiality, murder, polygamy, cruelty to animals, drug addiction, prostitution, incest, adultery, obscenity, and child pornography.

In any case, don’t feel bad about rejoicing at the demise of a semi-literate Neanderthal who wanted to bring down the democratic principles of the United States. Whenever a conservative dies, the proper response is to shout “Whoo-Hoo” and then get on with your life.

We should all look forward to some celebratory shouts over the upcoming expiration dates of Rupert Murdoch, Roger Ailes, Mitch McConnell, Charles and David Koch, Sheldon Adelson, Foster Friess, Paul Singer, Robert Mercer, Norman Braman, Woody Johnson, Joe Ricketts, Ken Langone, Peter Thiel, and so on. The world will be a better place without all this human detritus.