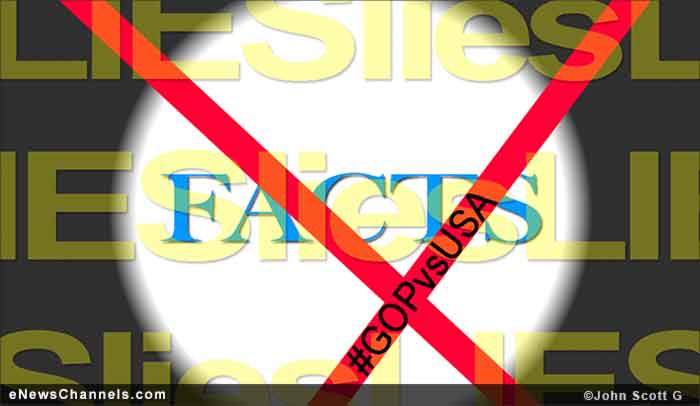 The conservative cabal is wide-ranging and well-funded. Collaborating with their primary co-conspirators in the GOP, conservatives are working hard to destroy everything good and decent about the United States of America.

Conservatives cannot survive elections in which facts are involved. When a conservative wins, it is only as the result of their having created a cloud of distortions, lies, and fear, often coupled with voter suppression. They do what they do because it works for them — although a better way to put it would be that we let them get away with it.

For decades, conservatives have practiced a concerted effort to spread prevarications, distortions, falsehoods, and general mendacity, all in the service of the most powerful corporate interests and the wealthiest individuals among us. “The people be damned” is the conservative doctrine.

The Good That Regressives Oppose

Even a cursory glance at politics during the past four decades reveals a consistent pattern of conservative actions that are anti-American (not to mention being antithetical to humanity at large). The current GOP-led House of Representatives displays conservative perfidy in microcosm — they have continually and repeatedly said No to universal healthcare; No to minimum wage reform; No to unemployment insurance relief; No to food supplement programs; No to education funding; No to infrastructure funding; No to veteran’s affairs funding; No to sensible gun legislation; No to revised immigration policy; No to voting rights; No to free and fair publically-financed elections; No to equal pay; No to gender equality; No to marriage equality; No to environmental protection; and more.

The Evil That Regressives Support

On the flip side of their treachery, take a peek at the policies conservatives love. They support corporate tax breaks at the expense of the middle class. They favor fracking at the expense of clean groundwater. They seek to destroy social security, Medicare, and the Affordable Care Act. They are fine with the offshoring of American jobs. They actively back discriminatory practices. They are attempting to destroy the post office. They are fine with sticking a multi-billion-dollar bill to the taxpayers by shutting down the government. They are sanguine about their constituents dying as the result of their refusal to expand Medicaid.

Who’s Behind the CON Job?

Disconcertingly, the odious acts of conservatives occur without their being held to account, possibly because they have several political parties dedicated to their duplicity, including the Republican Party, the Libertarian Party, the Constitution Party, and the Tea Party. (Note: that last one is simply a Koch Brothers front group whose members usually run as Republicans.)

In addition, there are numerous backers of the insidious conservative ideology that are hard at work every hour of every day. Conservatives have their own propaganda TV and radio programming (the Fox fake news channel is the primary television outlet and there are oodles of RWNJ radio bloviators). They have their own magazines and newspapers (“National Review” and “Reason” are a couple of the mag rags while Rupert Murdoch’s “Wall Street Journal” and “Weekly Standard” head the long list of yellow press outlets across the land).

In their search to make up justification for their perfidy, conservative goons-in-suits have created a swath of “think” tanks that formulate torturously twisted “findings.” The blather that emerges from the Heritage, Cato, and Manhattan monkey-houses alone would choke the founding fathers a hundred times over. But it’s worse than just publication of their obscenities because these places also dispatch speakers to pop up on news and talk shows to further promulgate the conservative nonsense.

Falling in lockstep with conservatives are a swarm of bacteria-in-human-form, such as the board of decision-makers at corporations that make money off the backs of those who actually do the work, the power-brokers at the NRA, the duplicitous members of ALEC, and of course the Klan and their ilk.

Yes, that Klan. After all, those slimewads aren’t liberals. And the Majestik Kleegle Dragonwizards have a lot of company — according to the Southern Poverty Law Center, there are 939 recognized hate groups in the US. Besides the various strains of white-sheeted morons, there are neo-Nazis, white nationalists, and neo-Confederates. It is not easy to determine their allegiance to traditional political parties but it is probably safe to say they are not strong supporters of inclusive organizations such as the Democratic Party, the Green Party, the Progressive Party, the Peace and Freedom Party, the Working Families Party, or any other gathering of respectable people.

Conservatives routinely deny their disgusting practices. They have effectively dressed up their homophobia as “defense of family values,” their misogyny as “tradition,” and their xenophobia as “America first.” They disguise their theocracy as “respect for religious views” and their plutocracy as “protecting the job creators.”

When it comes to their racism, they have relied on such deceits as “states rights” and “law and order,” although the current popular trick is to attack anyone who points out conservative racism by saying that is “playing the race card.”

As for their neo-Fascism, that is evident in their continual attempts to conflate government and industry, with the goal of having the state subservient to commerce via the removal of oversight for little items like air, water, food, workplace conditions, healthcare, etc.

Conservatives vigorously protest the use of the proper terms to describe their acts. This is to be expected (“I’m not a racist” is almost a mantra of the bigoted Republican party). What is frightening is how the media often gives in to their whining because huge rightwing corporate interests own the media. Yes, another CON job is their use of the term “liberal media” when there is not a single major news dissemination organization that is progressive, liberal, or even-handed.

Sure, there are some independent publications that represent truth and justice (“The Nation,” “In These Times,” and “Mother Jones” come to mind). Even huge conservative media corporations occasionally allow programming from brilliant minds like Jon Stewart, Stephen Colbert, and Rachel Maddow — but mass market distribution of news is in the hands of conservative conglomerates.

The Long and the Short of It

The conservative approach is effective only as long as they can influence their moron base. At present, they are successful. Sixty million morons voted for Mitt Romney in the 2012 presidential election and traitors like Louie Gohmert, Ted Cruz, and Mitch McConnell were elected along with hundreds of other corporate tools. But in the long run we could make conservative a losing game because facts, science, data, and reality are aligned against their emotion-filled emptiness.

This why conservatives decided to attack fact itself. Their dozens of fake think tanks have been created to churn out falsehoods supporting the plutocratic views that undermine democratic principles. Anyone who is willing to sell-out to the conservative big lie machine can get a radio show, speaking engagements, a book tour.

Some of these traitors, trolls, whores, and Uncle Toms even get invited to participate in media designed for honest people. To the consternation of anyone with a conscience or a soul, RWNJDBs (rightwing nutjob douchebags) regularly show up on otherwise valuable programs hosted by Bill Maher, Steve Kornacki, Alex Wagner, Lawrence O’Donnell, Chris Hayes, Melissa Harris-Perry, and so on. It is disheartening and disturbing when this happens and still more depressing when the CON filth and bile is taken seriously as an opposing “point of view.”

Having a conservative spew their verbal garbage as some sort of “balance” against factual data would be like explaining the age of the earth in a science class and then stopping the education to allow some moronic Bible-thumper to rant about how the earth is only a few thousand years old. No one would be stupid enough to do that. Oh wait, I forgot about how there are children’s “educational” videos making those silly claims, courtesy of Mike Huckabee (a CON presidential candidate, for crying out loud) .

As is obvious to any impartial viewer, conservatives have no qualms about how they are harming America. They have no shame, no decency, and no morality as they attempt to subvert the basic ideals of the country.

That is why several of us have decided to fight back. Here’s hoping you will join us. Yes, it requires basic humanity as well as the ability to think and read. But beyond that, joining our battle is very easy. We are simply making an attempt to establish the #GOPvsUSA hashtag on social media.

Let’s make it easier for everyone to follow the whole sad and sordid story of conservatism. Call out the CON jobs. Point to their perfidy. Help make this the decent nation we know it could be.