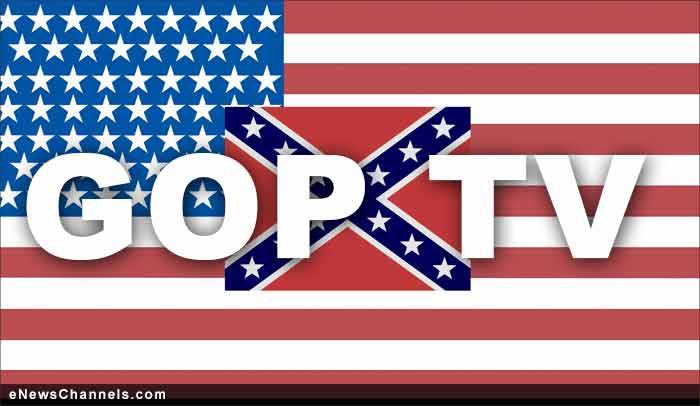 After a friend wrote me about seeing a TV show called ‘Focus on New Mexico,’ we both started wondering if GOP-controlled states have similar programs. Of course they do! Let’s take a peek at the outline for one of their offerings.

The Opening
An animated sequence shows a map of the United States with all the normal states falling off the flat edge of the earth, leaving only the states of the Old Confederacy.

Music for the opening sequence is an orchestral version of that fine example of superb Southern songwriting, “Goober Peas.” With a flourish, gleaming title graphics fill the screen: “What to do in Yeehaw City: You’re Doing It!”

News Update
In the role of news anchorperson is one of the state’s many, many dozens of people who are actually able to read, in this case, the 32-year-old almost-college-graduate and former telemarketing specialist Sue Ellen Beckman. She is called Sue-Bee by her friends and That Bitch by co-workers.

At the beginning of each broadcast, Sue-Bee immediately covers all of the data deemed essential by her viewers — day-of-the-week, time-of-day, temperature, price of hog feed, and the current hiring needs at the fertilizer factory.

Next, some precious seconds of airtime are wasted by reading the headlines of made-up crap found on the Fudge Report, Faux News, and Not Very Bright Bart’s Place. “We use this stuff because if you find it on the Internet, it must be true,” says Sue-Bee, always the intrepid reporter.

Go Along to Get Along
Next up is a segment known as “This Week in Bigotry,” which often highlights the good work being done by the Westboro Klangregational Church, the many Tea Bagger Bund organizations, and whoever is Rand Paul’s writer, a position sometimes known as the Southern Apologizer.

Because of the region’s high level of interest in the topic — not to mention the wealth of activity throughout these states — this is usually one of the longer parts of the program and always features documentary footage showing vandalized property of blacks, Hispanics, Asians, or any other ethnic or religious group that is not, as Cooterville mayor Christy Pribus puts it, “reg’lar folk jess like us.”

Eddycation
This segment, which comedienne Lizz Winstead says should be called “Stupiding Up R Skulles,” deals with the entire spectrum of Southern states’ advances in education. In other words, this topic hardly ever appears in the program.

When a blue state reporter inquired about the dearth of stories dealing with this issue, one of the show’s producers commented, “Look, miss fancypants, literacy tests ain’t never proved nuthin’.”

Propaganda by the Pound
While the program is produced on a budget as low as its average viewer’s I.Q., the station’s management team is able to make the show seem like a much bigger enterprise by relying on pre-packaged video segments graciously donated by the Kochsuckers, The Heretic Foundation, the Hate-oh Institute and other organizations dedicated to the dissemination of stories in the public disinterest.

Some of these fascinating mini-documentaries are intellectually brilliant and quite even-handed as you can tell from their titles: “Creationism Destroys the Lies of Darwin’s Evil ‘Theory’,” “How Sinful Hate-Mongering Communistic Socialistic Big Brotherism Could Bring Healthcare to Poor People if We Don’t Stop Them Now!” and “The Rich People Running the City, County, and State are All Your Friends so Please Don’t Rise Up and Kill Them.”

Kwick Kwiz Kicks
Each show features a segment in which two families battle to see who wins a week’s supply of extra-crispy fried chicken gizzards by answering such important current events questions as “Who is the most obnoxious mayor of a U.S. city, Rob Ford or Chris Christie?” The fact that Ford is mayor of a Canadian city and that Christie is not a mayor just adds to the surreal fun of the proceedings. “Facts is for lib’rals,” according to one of the show’s producers.

Face Time
A one-on-one, no-holds-barred, take-no-prisoners interview is often the highlight of the program. People who have faced the onslaught of tough, probing questions include many of the area’s most important citizens, as you can see from the following list of recent guests (with examples of the “let’s get the facts straight” questions shown in parentheses).

Billy-Zack Jemson, night manager at Lindy-Sue’s Bacon Barn. (“Why does an extra scoop of grits cost fifty cents after 11 a.m.?”)

Rusty-Joe Bateman, sales manager at the John Deere dealership. (“Sometimes the tractor brochures are creased and greasy — what are you doing to assure the people that you’re looking into resolving this dreadful problem?”)

Lula- Rayleen  Koapes, assistant manager at the Git-Mor Five-and-Dime. (“How come the soda fountain only has the double-sugar root beer when over in Briarson County they have triple-sugar root beer?”)

The show’s producers are still working hard to book Cletus, the Slack-Jawed Yokel from “The Simpsons” despite the fact that he is an animated character. “That’s all righty with us,” said one of the station executives, “because we expect our guests to be lively.” When it was pointed out that “animated” meant the character was drawn, the man replied, “Hey, after all the plum hard work we put into this here show I’m feeling a bit peaked my own self, I can tell you. But drawn, peckish, droopy, or peeved, we still want a celebrity on the show.”

Moron Reports (with a side of Cretin Sauce)
Popular features on the program have included: “In the Name of Family Values, We Must Re-elect our Philandering Councilman.” “In the Name of Reverence for Life, We Must Kill Women’s Clinic Doctors and Nurses.” “In the Name of Fiscal Responsibility, We Must Cut Taxes on the Rich while the Rest of You Learn to Get By or Die.”

Other very popular segments have included the following: “As Lynching Makes a Long-Awaited Comeback, Check these Tips for a Successful Necktie Party!” “Poor People Death Watch (Help us push for a new record this year!)” “Starving Kids Say the Darnedest Things!” “Mike Huckabee’s Plan to Dumb Down Your Son and Daughter Using Inaccurate Kids Videos.” “In the Name of Religious Freedom and Tolerance, We Must Wipe Out Jews and Muslims.”

Several of these reports have received the prestigious “Robert E. Lee Prize for Gooder Jornilizm.”

End Credits
As a badly-spelled list of crew members scrolls up the screen, there is a bright band of yellow and red across the bottom of the picture displaying an invitation for viewers to send comments to the broadcaster’s main office at Red State o’ Hate, PO Box 37047734, Moronia, USA.