Planese, Inc. today announced that homeowners across the U.S.A. are now willing to spend 30 percent of the value of their home when they remodel. In fact, remodeling expense as a percentage of home value has been trending upward since 2007. Consumers also plan to use materials that are more expensive and spend an average of $102,000 to improve their homes. 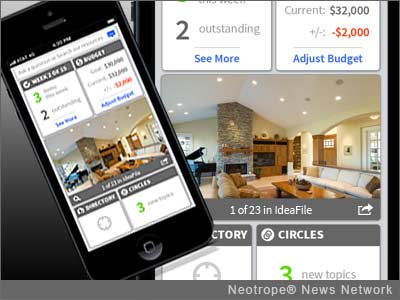 SUNNYVALE, Calif. /eNewsChannels/ — NEWS: Planese, Inc. today announced that homeowners across the U.S. are now willing to spend 30 percent of the value of their home when they remodel; remodeling expense as a percentage of home value has been trending upward since 2007. Consumers also plan to use materials that are more expensive and spend an average of $102,000 to improve their homes.

These findings are part of the “Fall 2013 Remodeling Sentiment Report,” a forward-looking report based on data from Planese’s and the Remodel or Move survey of homeowners nationwide that analyzes and documents trends in the home improvement industry. Planese compared the responses of today’s homeowners throughout the nation against the findings reported both during the recession in 2010 and at the height of the remodeling boom in 2007.

“The wealth effect is taking hold; consumers are spending again, which bodes well for the entire home improvement industry,” said Dan Fritschen, CEO and co-founder of Planese, Inc. Since 2005, Fritschen has researched and published remodeling industry data about U.S. homeowners, their remodeling plans, and their intentions. “More people are feeling secure enough during this economic environment that they are remodeling. It’s no longer the most affluent; we are at the beginning of a multi-year trend.”

More homeowners (74 percent) plan to hire a general contractor, which is up significantly from the 64 percent reported in 2010 and 2007. The percentage of people who plan to engage an architect (56 percent) has bounced back from the low of 47 percent in 2010 during the recession. As the scope of projects increases, so does the need for an architect.

The projects planned are larger; the average number of rooms to remodel is four. Homeowners are more likely to remodel a kitchen (55 percent), which tends to be expensive and often is a discretionary expenditure, than a bathroom (48 percent), which is often viewed as a necessity.

Planese, Inc., the pioneer in collaborative home improvement, helps homeowners approach, plan, and carry out their home remodels by providing an easy-to-use solution. Powered by proprietary algorithms and enriched by community contribution, Planese provides a personalized, localized, interactive, intelligent, collaborative, and intuitive mobile app that delivers real-time information to homeowners. Planese creates a collaborative environment within the remodeling industry, empowering customers with the information they need to make informed decisions.

Planese partners with home improvement product and service providers so they can advertise and market more effectively. The company was founded in 2013 by home remodeling authority Dan Fritschen and other remodeling, technology, and marketing experts.