NEW YORK, N.Y. — The end of the recession may be in sight as foreclosure rates were down again in many states in November compared with October while foreclosure prices were up. Comparing rates and sale price figures from ForeclosureListings.com offers a positive economic snapshot of the current housing market. For buyers who have been waiting and watching the market, now is a good time to buy. 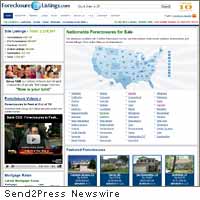 These changes show an overall positive result for the market from October to November but also a lot of volatility. Keep track of the latest rate and price changes for foreclosures on www.ForeclosureListings.com .