Uproar Entertainment is excited to announce the release of “Live From Las Vegas” by Alex Elkin. Comedian Alex Elkin has a comedy style that is unique and true to himself. He is unapologetic, says what he thinks, delivers the unexpected, and knows what funny is.

eNewsChannels NEWS: LOS ANGELES, Calif., — Uproar Entertainment is excited to announce the release of “Live From Las Vegas” by Alex Elkin. Comedian Alex Elkin has a comedy style that is unique and true to himself. He is unapologetic, says what he thinks, delivers the unexpected, and knows what funny is. 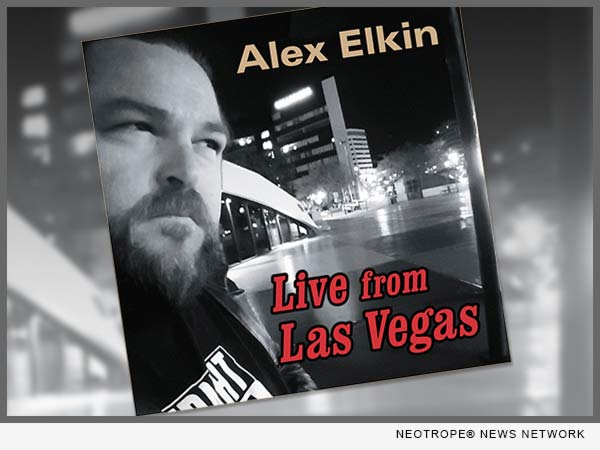 In his own words, “I’m astounded by where material comes from!” He has a natural instinct that allows him to take random ideas and mirror his thoughts into relatable comedy bits for discerning audiences. Having worked with national acts such as Hannibal Buress, Ralphie May, Gabriel Iglesias, Pauly Shore and Carlos Mencia (just to name just a few), Alex has proven that he brings his A-game to every stage he sets foot on. His greatest inspiration in comedy is Brian Regan, who makes “thousands of people laugh just by talking about eating a sleeve of Fig Newtons.”

Alex Elkin began his professional comedy career in the clubs of Hollywood California in ’94 before he was old enough to be allowed in the front door. However his comedy journey started long before then. For as long as he can remember, he knew he wanted to make people laugh. At the tender age of 8, Alex used his natural gift for comedy to detach himself from the daily realities of his home life where his father was battling a serious disease. At school he used comedy to beat the bullies to the punchline, curry favor and avoid being hurt.

He listened repeatedly to his father’s records of The Smothers Brothers, Steve Martin, Richard Pryor, and George Carlin. Before he really understood what it meant to be a “Comedian” he knew he wanted to be one. By the time he was 18, he was cracking jokes both on and off the boat while working as a skipper on the Jungle Cruise at the Disneyland Resort.

Alex Elkin has headlined “The Dirty@12:30,” the #1 comedy show in Las Vegas; Harvey’s in Portland; Reno/Tahoe Comedy Club; Improvs and more. In 2014 and 2015 he produced two cross-country tours. Better known as “Beans” on The Brickwall Comedy Show (#1 Afternoon Radio Show in Eugene Oregon) Alex Elkin is one of the three voices that act as potent laughing gas on radio station KLZS AM – All Comedy 1450, of which he is also owner. One of his partners, Chris Warren, notes that Elkin shines because of “his ability to adapt to an audience. He can read the audience and that’s something that most comedians don’t have the ability to do.”

He worked as a writer/actor/director/producer on the TV show “Faces” on KLSR FOX-TV. Alex has been on “Last Comic Standing,” E!’s “The Simple Life” (Season 5), TNT’s “LEVERAGE” (Season 4 & 5), and on NBC’s “GRIMM.” Most recently he was the winner of the 2016 San Francisco Comedy Festival.

According to Alex: “For what it’s worth I’d just like to say that if you work at something long enough, put in the work and don’t take the short cuts…eventually opportunity will meet you at your skill level and success is sure to follow. On the other hand, in comedy nothing is ever fair, nothing ever makes sense and don’t take it personally.”

Uproar Entertainment is committed to recording and promoting today’s most talented comedians. Under the helm of David Drozen, the man who discovered Richard Pryor in early 1970, signed him to his first recording contract, and produced 12 of his albums for the legendary comedy label Laff Records, Uproar nurtures, supports and develops the best comedic talents of our time. With an unparalleled ear for comedic talent, Mr. Drozen is responsible for discovering many of today’s comedy greats, producing their very first comedy albums and igniting their comedy careers. Under his leadership Uproar Entertainment is “makin’ comedy happen!”

“Live From Las Vegas” is available on iTunes at:
https://itunes.apple.com/us/album/live-from-las-vegas/id1183479951