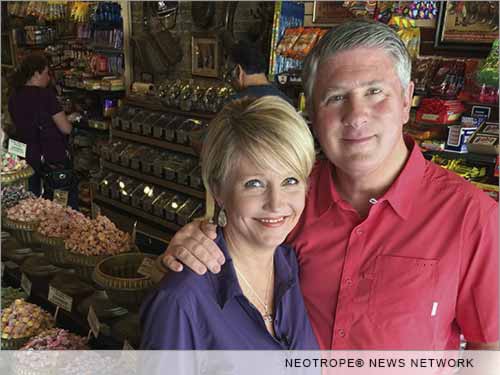 NEWS: Bob Phillips will no longer be traveling alone on the popular TV series, “Texas Country Reporter” (TCR). Beginning this September Kelli Phillips will join TCR and travel the back roads of Texas with Bob.

Kelli Phillips, former news anchor of KFDM in Beaumont said, “I have watched this show long before Bob and I even knew one another and I’ve always admired the storytelling. Now, I get to bring my own brand of storytelling to TCR.”

Kelli and Bob are now married having exchanged vows in 2007. As it turned out they worked together at the same TV station. TCR airs every week on KFDM where Kelli was the number 1 news anchor at the CBS affiliate.

“This is the biggest change our show has ever made,” said Bob Phillips when making the announcement. “People tell me almost daily that I must have the best job in the world and I’m sure I do. This change makes it that much better!”

Beginning with the new 2015-2016 TV season, the weekend of September 12-13, Kelli and Bob will co-host TCR and, together, will extend the famous invitation to “hop in and travel with us. This is Texas Country Reporter.”

TCR is a weekly, half-hour series co-hosted by Kelli and Bob Phillips. The program airs in all 19 Texas TV markets, satellite and cable network, RFD-TV and on Sirius XM Radio Channel 80. More information is available online at http://texascountryreporter.com/.

Phillips Productions is a subsidiary of Phillips MediaSource, an all-in-one company specializing in development, production, branding and distribution of video content for all screens. Based in Dallas, Texas the president and CEO is Bob Phillips. More information is available online at http://phillipsmediasource.com/.