SUNNYVALE, Calif. — After a year of steady declines in home remodeling, the Spring 2010 RemodelorMove.com U.S. Remodeling Sentiment Report reveals a 13% increase in the number of homeowners who say they will remodel in the next 12 months. This increase follows a 5% increase in last year’s Spring 2009 report. The continuing upward swing in remodeling sentiment indicates that 2010 will show a strong increase in remodeling activity. Detailed report is available at www.remodelormove.com/survey_reports.cfm . 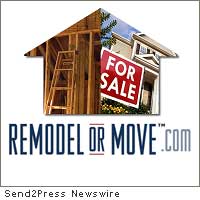 The Spring 2010 Sentiment Report, a survey of 5,000 homeowners in the U.S. who are considering remodeling, also shows that the recession has had several impacts on U.S. homeowners. These include:

* The most popular projects in the past – remodeling the kitchen and bathrooms – have decreased in popularity, as adding a bathroom has taken the honors of the most popular project. This makes sense since, for many homeowners, updating an existing room can be put off because it is often seen as a “luxury,” while for many the addition of a bathroom is a necessity due to changes in the needs of the family.

* Interest in do-it-yourself projects, both the actual building as well as acting as their own general contractor, has remained steady throughout the economic downturn.

* The number of homeowners reporting they are “excited” about remodeling has climbed to an all-time high of 54%, which is primarily due to homeowners who aren’t excited about remodeling choosing to put their plans on hold to wait until the recession is over.

This may be a costly choice for homeowners since the cost to remodel now is as much as 20% lower than in 2006, according to a special cost to remodel study published earlier this year at www.remodelormove.com .