GRANITE BAY, Calif. — Prepare Stay Defend (PSD), a California non-profit organization, has launched a web site that empowers homeowners against wildfires; they are the first organization of its kind to support homeowners, nationwide, through their educational web site and on-line fire training.

Have you ever seen ill-prepared homeowners standing on rooftops dressed in shorts and t-shirts while spraying water with a trickling garden hose? These are images that the PSD training program hopes to eliminate. 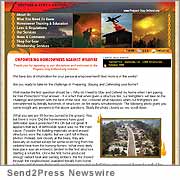 Founders Steve Bowman and Roy Pike have over 70 years of combined expertise in pre-fire mitigation and actual wildfire suppression; their goal is to share this information with the public.

“I’m tired of seeing hundreds of homes burning with limited protection, and I’m tired of seeing homeowners staying behind to defend their home without training or protective clothing,” Bowman said. “It’s time to empower the homeowner with knowledge of fire dynamics and the training they deserve and desire.”

PSD reduces the chance of injury and/or death and promises to significantly increase a home’s survival if the homeowner stays to defend it.

Many factors are involved in defending a home from fire. They include physical and psychological preparedness and learning how to create defensible space and properly prepare the home and homeowner.

“The idea of Prepare Stay and Defend methodology is not new,” Pike explains. “In 2006, Aussies successfully implemented this method and many homeowners in the U.S. have been pressing for this type of program.”

The main emphasis of the web site, which offers the same Federal courses administered to professional wildland firefighters, prepares homeowners to defend their homes and neighborhoods while allowing for reasonably safe “staying and defending” activities.

PSD recommends that homeowners evacuate to a safety zone early in the process if they are not able to expend a high level of physical exertion or are not psychologically prepared for the stresses of firefighting.

Bowman explains that since 1990, in California alone, there have been over 15,000 structures lost in wildfire. Most homes are lost due to burning embers falling onto and around the home causing spot fires.

“The number of destroyed homes during a wildfire is related to the lack of firefighting resources and most residents are killed during the evacuation process,” Bowman added. “Using the home as a shelter, when trapped by the wildfire, has long been recognized by professional firefighters and is reflected in their wildfire training.”

PSD believes that the homeowner should also be trained on how to use their prepared home as a shelter.

Similar to the militia during the American Civil War, properly trained and equipped homeowner fire brigades can be valuable resources to U.S. fire services during wildfire sieges.

This new web site provides practical information to help homeowners and communities prepare for a wildfire and to establish local safety refuges. It teaches homeowners how to conduct pre-fire planning; plan evacuation routes; promote the use of protective clothing and fire suppression equipment, and more.

To effectively work with local fire agencies, PSD is ready to establish better communication between local fire departments and homeowners by acting as an advocate and a clearing house for the homeowners. Pike explains that the fire service must recognize that they cannot solve the wildfire interface problem alone.

“Maintaining the status quo will only lead to more lost homes, residents and firefighters,” Pike said. “Fire services must be willing to change their wildfire interface tactics and strategies to meet the actual conditions on the ground.”

Homes will continue to be built in wildland areas. People will continue to cause fires in these areas, either accidentally or with malice aforethought, and the public outcry for mitigating the damage will only grow louder; PSD can help to change this destructive cycle.

To learn more about this method of saving homes and lives, visit: www.prepare-stay-defend.org .

Giroud Tree and Lawn share 2020 tips homeowners can use to spot dead branches in trees and how to handle them Feb 10, 2020