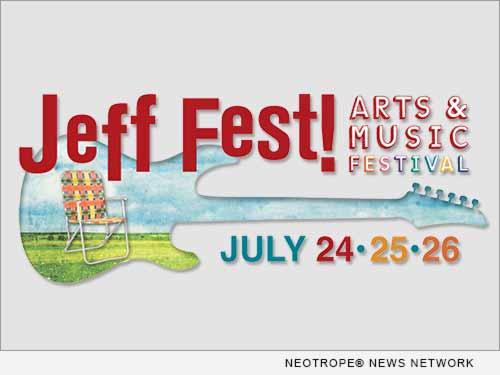 “We’re proud of the musical line-up at this year’s Jeff Fest,” says Amie Zander, Executive Director of the Jefferson Park Chamber of Commerce. “We put effort into getting top name musical talent such as Jonathan Jackson + Enation, and JC Brooks and the Uptown Sound, plus we are bringing back some of the attendees’ favorite entertainment such as the John Yost Drum Circle.”

The weekend is packed with music in addition to Saturday’s headline act of Jonathan Jackson + Enation. Friday kicks off with some “heavy metal” sound from Eliminator and Blackened, and Sunday features JC Brooks and the Uptown Sound (JCBUS). JCBUS call Chicago its home, and has toured North America and Europe, including playing at Lollapalooza.

Jefferson Memorial Park is located at 4822 N. Long Avenue, just west of Milwaukee Avenue. Fest-goers are encouraged to take public transportation, as the Jefferson Park Metra and CTA Blue Line transportation hub is just a block from the festival grounds. Plenty of bike racks also will be available.

Road closures: Linder Avenue will be blocked off between Higgins and Lawrence Avenue for the three-day festivities.

Presented by the Jefferson Park Chamber of Commerce in partnership with the Jefferson Memorial Park Advisory Council and the Chicago Park District, along with media partner 104.3 K-HITS Chicago.

For more information, go to http://JeffFest.org.

Be sure you are the first to hear of announcements and plans for Jeff Fest and follow @JeffFestChicago on Twitter and Jeff Fest Arts and Music Festival on Facebook at: https://www.facebook.com/pages/Jeff-Fest-Arts-Music-Festival/96599731822 .