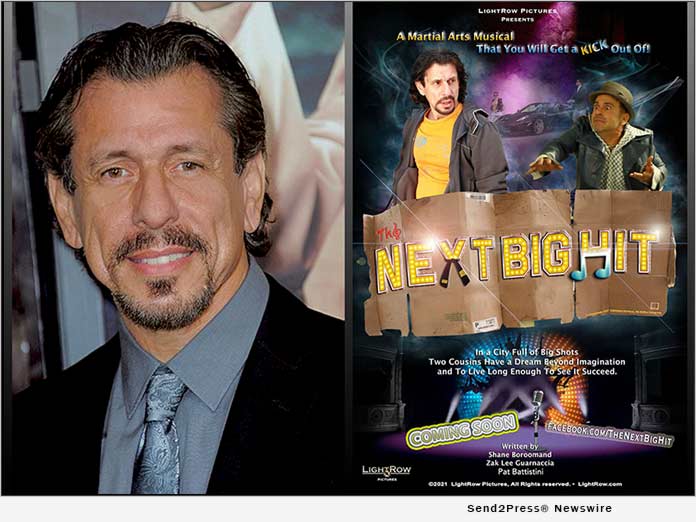 (LOS ANGELES, Calif.) — NEWS: To his knowledge, it hasn’t been done before, but that doesn’t scare Zak Lee Guarnaccia, actor/stuntman, and executive producer at LightRow Pictures, a subsidiary of Light Row Ranch, LLC (https://www.lightrowranch.com/). In fact, it excites him. Audiences are hungry for something new and he’s ready to deliver with “The Next Big Hit,” a martial arts musical comedy, set to come out fighting in 2022.

With its dark, comedy-crime underworld storyline, this offbeat buddy flick pairs up a fabulously gay movie producer on the run from a loan shark with his very straight cousin, a martial-arts stuntman. An outlandish plot about making a martial arts musical ensues.

“The Next Big Hit,” directed by Renata Green Gaber; created and written by Zak Lee Guarnaccia; and screenplay by Pat Battistini and Cerina Vincent (“Stuck in the Middle” Disney Channel), is slated to co-star with Guarnaccia and comedic talent, Perry Anzilotti. Currently in its pre-production phase, Guarnaccia is confident that “The Next Big Hit” will be worthy of Screen Actors Guild and Academy Awards consideration.

To generate a buzz and movie support, Guarnaccia will repeat a fitness challenge he completed in 2012 where he climbed 189 steps at the “Santa Monica Stairs” in California for a non-stop 24 hours. This time he’s inviting others to join him in the “Extreme Fitness Challenge, which will also benefit “The Heart of Los Angeles” (HOLA), a non-profit organization that gives underserved young musicians a chance to spotlight their work in “The Next Big Hit.”

A self-described “underdog,” Guarnaccia says passion drives him. He moved to the U.S. from Italy in 1989 with $400 and a dream to compete as a professional martial artist and to establish a career as an actor and stuntman. He’s always been enamored by martial-arts themed movies and comedies and the growing popularity of “LGBTQ-themed” shows featuring predominantly LGBTQ and minority cast lineups. Recent feature films he’s worked on include: “Judas and the Black Messiah;” “Red Notice” with Dwayne “The Rock” Johnson; and “The Morning Show” with Steve Carell and Jennifer Aniston.