Core Redevelopment, LLC has announced that it has agreed to redevelop the historic American Can building near downtown Terre Haute, Indiana, into approximately 178 loft-style, market-rate apartments known as One Sycamore.

In partnership with the City of Terre Haute, Indiana State University and the Indiana Economic Development Corporation, Core Redevelopment’s $23 million investment will breathe new life into this long-vacant but important historic landmark. 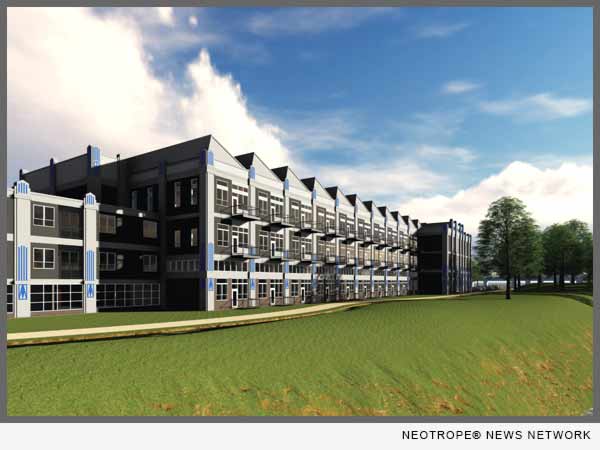 Slated to open in mid-2018, One Sycamore will offer residents urban living alternatives not currently found outside major metropolitan areas – contemporary apartments with open, loft-style floorplans, industrial design elements and ceiling heights of 16 feet or more. The property’s residences will be predominantly one-bedroom units, with about one-third offering two or three bedrooms.

Rents are expected to range from the mid- to high-$600s for smaller one-bedroom residences to more than $1,400 for larger, two-story units on the third floor. Each apartment will be appointed with high-quality fixtures and finishes, including polished concrete floors, granite countertops, in-unit washers and dryers, solid wood cabinetry and stainless steel appliances, to name just a few.

Residents of western-facing apartments will enjoy unimpeded views of the Wabash River, while balconies to the east and south will overlook Indiana State’s new Gibson Track and Field facility and, beyond, the University’s main campus and downtown Terre Haute. In addition, a three-story lightwell will be cut through the middle of the building, allowing the creation of inward-facing apartments.

The City of Terre Haute, whose greater downtown stands to benefit directly and significantly from the project, will consider financial support for the project in the form of tax increment financing. The redevelopment of American Can will be a transformative event for Terre Haute’s long-term efforts to activate community involvement and economic development along the Wabash River.

“Repurposing the American Can building has been a long-term goal of Terre Haute’s for a very long time for a lot of different reasons. To finally achieve this goal, and to see hundreds of new downtown residents enjoying everything Terre Haute and the Wabash River have to offer, will be a proud day for everyone who worked long and hard to make this a reality,” said Duke Bennett, Mayor of Terre Haute.

The State of Indiana is also providing material financial support. The Indiana Economic Development Corporation, or IEDC, voted in July to issue up to $4.7 million in Industrial Recovery Tax Credits in support of this project.

“Buildings like American Can were once important as economic drivers and sources of civic pride for communities,” said Jim Schellinger, president of the IEDC. “The redevelopment of this abandoned building will draw more residents and professionals to the downtown area, supporting the growth and vibrancy of Terre Haute and the Wabash River region. These types of projects are vital to Indiana as we work to make Hoosier regions the best places to live, work and play.”

As for Indiana State University, which currently owns the American Can building, the property’s redevelopment will provide a major step forward in its efforts to expand its campus, in particular its athletic facilities, west toward the Wabash River. According to Diann McKee, Senior Vice President of Finance and Administration and Treasurer for Indiana State University, “The American Can building was acquired as part of a broader real estate strategy to give the University access to land needed to execute key portions of our campus master plan, especially as it related to athletics.

The University issued a request for proposals in 2013 to solicit interest from potential developers in adaptive reuse of the building. Core Redevelopment was the only respondent. Since 2013 the University has been working with Core to repurpose the facility. Once the American Can building is redeveloped, it will provide the new Gibson Track and Field venue with a look and feel that will be one-of-a-kind and impressive to Terre Haute visitors.”

For its part, Core Redevelopment is thrilled at the opportunity to develop its second property in Terre Haute in just a few years. Its first, The Deming, an eight-story former 1920s hotel located on the corner of Fifth and Cherry Streets, was renovated as part of an historic tax credit rehabilitation in 2015. It has been fully occupied since opening, and that success has given Core confidence operating in Terre Haute. And while its work on the American Can building will not technically be an historic rehabilitation, Core will nonetheless bring to bear on American Can its expertise in and passion for repurposing large-scale industrial and commercial buildings. According to Core Redevelopment chief John Watson, “We love buildings like American Can and Deming. We feel like they’re being entrusted to us, and bringing them back to life gives us a real sense of accomplishment. We’re not just helping cities like Terre Haute economically. We’re also helping them maintain a connection with their past. Every decision we make factors that in.”

In addition to a significant investment of its own funds and those of its equity partners, Core Redevelopment intends to finance the redevelopment of the American Can building with first mortgage financing from First Financial Bank, N.A., based in Terre Haute.

The American Can building is a 186,000-square foot masonry structure with a rich commercial heritage. Sitting due west of Indiana State University’s existing campus on the eastern bank of the Wabash River, the American Can building opened in 1931 to make tin cans, among other products. Pillsbury bought the property in 1963 and used it to make various food products until 1991. Subsequently purchased in 1995 by ICON Transportation and used for storage, the building has been vacant since the early 2000s.

Global Progress Fund partners with international businessman, Kofi Nartey, as a founder and core member of the management team Nov 3, 2021