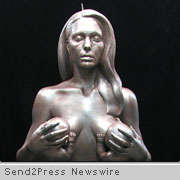 In recognition of the global effort to encourage breastfeeding, one twin is depicted as being of African descent. Future castings of the statue will represent other world cultures through variations of the babies’ patina coloring.

“We believe the statue sends a beautiful message by promoting the acceptance of public breastfeeding. Mothers should be encouraged to nurture their babies anywhere,” said Sandy Wilson of Phantom-Financial.

“Hopefully, my sculpture inspires an increase of wet nurses to assist women who have concerns about mastitis, or passing HIV to their infant,” said artist Daniel Edwards in his Connecticut studio where the Jolie statue currently resides.

“La Leche League International and Loretta McCallister have been very helpful,” said project coordinator Cory Allen. “We are applying for approval to put ‘Landmark for Breastfeeding’ on permanent display in a Metro area park.”

The Jolie monument will be unveiled September 11th at MAINSITE Contemporary Art in Norman.

A cast of the sculpture is expected to be auctioned by Sotheby’s October 7th for The New York Academy of Art’s annual Take Home A Nude art auction, after being displayed at Holster Projects in London’s West End.

“Landmark for Breastfeeding,” a short film documenting the project by filmmaker Dave Smith, produced by Vacant Era Films has been posted on YouTube.

Edwards’s past works of celebrity motherhood include “Monument to Pro-Life,” featuring Britney Spears giving birth on a bearskin rug, and “Octomom: String of Babies.”