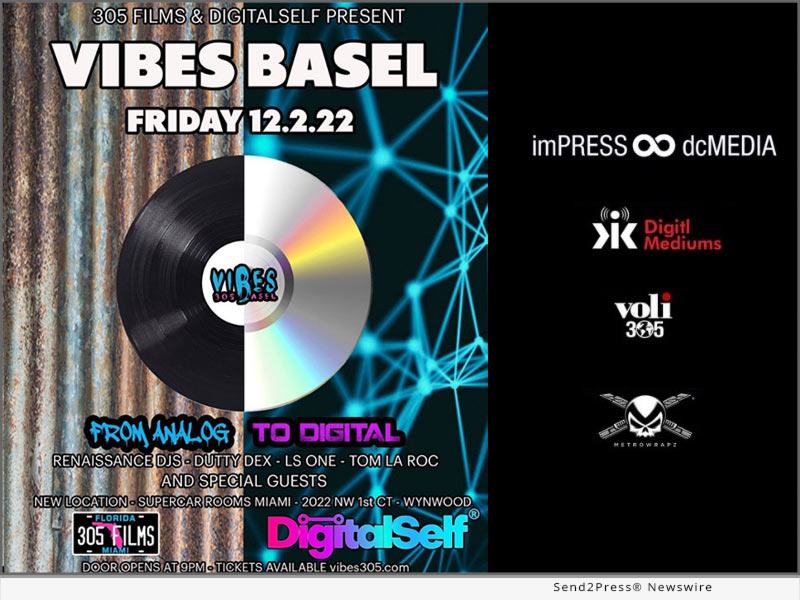 (MIAMI, Fla.) — NEWS: DigitalSelf®, Gil Green and 305 Films are pleased to announce their partnership to present the 9th annual Vibes Basel. DigitalSelf is the Title Sponsor for Vibes Basel, under the creative direction of Gil Green, at Art Basel at Supercar Rooms Miami on Friday, December 2, 2022.

“DigitalSelf has been hosting and participating in several events in Miami over the past few months,” said Craig Muir, founder and CEO of DigitalSelf. “These events have served as DigitalSelf’s, and its Metaverse and 360-degree streaming services, formal introduction to the world. Vibes Basel will be the culmination of this fall’s events, and we are delighted to begin our partnership with Gil Green and his 305 Films production company.”

DigitalSelf is an immersive technology development company whose platform is aimed at creating virtual lifestyles and universal access to the Metaverse. DigitalSelf is creating immersive environments with 360/VR interactive experiences/content for a growing number businesses, brands, and tourist destinations, both domestically and internationally.

“I am very excited to be working with DigitalSelf,” said Gil Green, 305 Films founder and creative director of Vibes Basel. “We will be combining artists with the immersive nature of VR, AR and 360 streaming. No one in the Metaverse space has done anything like this, and we look forward to our collaboration on this and other projects.”

DigitalSelf was founded by Craig Muir. DigitalSelf is an immersive technology development company whose platform is aimed at creating virtual lifestyles and universal access to the Metaverse. In DigitalSelf, consumers will increasingly spend part of their everyday life transported into virtual environments where they will socialize, connect and engage in immersive experiences. DigitalSelf and the DigitalSelf Wallet are the first apps built to deliver our vision of a universally accessible digital representation of our lives, content and memories.

In the DigitalSelf apps, we are building an ecosystem where our users can leap into festivals, soccer matches, conferences, colleges, concerts, museums, championship sports and even medical appointments anywhere on Earth.

About 305 Films and Gil Green:

305 FILMS has produced over 305 music videos, commercials, and films, ranging across the United States, South America, The Caribbean, The Middle East, India, Africa, and Asia. 305 FILMS continues to expand, cultivating a new generation of stylistically creative and impactful filmmakers, such as Gil Green. Gil’s first glimpse into the business stemmed in high school as a DJ in Miami’s emerging Hip Hop and Dancehall Reggae scene.

Underground battles and warehouse sound clashes set the stage for a cultural explosion. At the age of 19, Gil directed his first music video for his NYU thesis project. Gil went on to direct over 300 music videos spanning across the Pop, Latin, and European markets and has been honored with multiple awards and nominations for his work in music videos.