OKLAHOMA CITY, Okla. — Phantom-Financial announces the December unveiling of the sculpture of Brad Pitt and Angelina Jolie in an amorous embrace by artist Daniel Edwards, just minutes from Brad Pitt’s own birthplace in the Oklahoma City Metro area. The sculpture is part of the 4,000 Sq. Ft., $500,000 house named “The Brangelina,” by the Los Angeles artist known as Xvala. 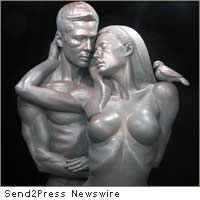 “Brangelina Forever,” a life-size casting of Brad and Angelina in bed, making love Harlequin Romance-style, with a cooing dove perched on Brad’s finger, is installed in the ceiling of the master bedroom to inspire a ‘sexual healing’ for the room’s occupants.

The statues are embedded with crushed glass containing Brad and Angie’s DNA obtained from wine glasses from which they drank while reportedly celebrating the anniversary of their first meeting on the set of “Mr. and Mrs. Smith.”

“The ‘Brangelina’ sculpture is destined to exist forever, the way Brad and Angie’s relationship will persist in people’s memories. Theirs is the Elizabeth Taylor and Richard Burton romance of our time,” said publicist Cory Allen.

Inspired by Brad Pitt’s mission to help rebuild houses in New Orleans’s Lower Ninth Ward after hurricane Katrina, the artist Xvala built “The Brangelina,” a house which requests its future owners agree to extend ‘Honorary Ownership’ of their home to Pitt and Jolie, and to accommodate them every time they come to town to visit Pitt’s grandmother.

“I believe every home in America should become an ‘honorary home’ to our superstars, in order to connect celebrities and regular people in spirit,” said Xvala.

The statue and the house are part of the documentary “Domestic Bliss: The Daniel Edwards/XVALA Project” by Oklahoma filmmaker Dave Smith and produced by Vacant Era Films, scheduled to premiere at The New York Academy of Art. A segment of the film has been posted on YouTube.

The Brangelina will be on public view starting Wednesday December 16th at 11 a.m. in the Thornbrooke neighborhood of Edmond. For more info, contact Cory Allen at 405-201-3910 or visit .

Send2Press(R) is the originating wire service for this story, issued on behalf of the news source. Copr. 2009.