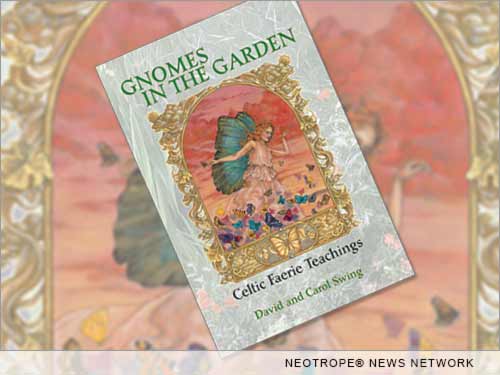 ASHEVILLE, N.C. /eNewsChannels/ — NEWS: North Carolina author and intuitive counselor David Swing says gnomes, elves and other fairies are found not just in Europe, but also in the United States and other countries around the world. He has written about his experiences with fairies in his books, “Gnomes in the Garden” (ISBN: 978-0974239408) and “The Celtic Owl” (ISBN: 978-0974239415).

“It’s simple, really,” Swing explained. “Fairies are right out there in your own backyard, but you can’t see them, because your mind doesn’t believe they exist. They are so accustomed to you not seeing them that they don’t pay much attention to you unless you give them a good reason. If you really want to meet a fairy, the best thing you can do is spend time outdoors, because that’s where you are most likely to find them.”

When he was a boy, David’s second sight gave him the ability to see and hear ghosts and other beings invisible to those around him. He pushed this ability aside as he grew older, but it returned in a surprising way in 1997 when two gnomes appeared before him as he watched TV, politely introducing themselves and wishing him a good day.

Though David at first believed he was imagining them, the gnomes continued to visit him each day. Once he had grown accustomed to their presence, they began to introduce him to other fairies, including elves, winged sprites, brownies, and more gnomes.

With encouragement from his wife, David published his first book, “Gnomes in the Garden,” which outlines his experiences with gnomes and other fairies and offers information and stories from the fairies themselves. He later completed “The Celtic Owl,” which leads readers through a year of fairy adventures and teachings focused around the Celtic holidays.

David Swing makes his home near Asheville, North Carolina. He is available for intuitive counseling sessions by phone, email or in person and offers fairy workshops for large or small groups. His books, “Gnomes in the Garden: Celtic Faerie Teachings” and “The Celtic Owl: A Year with the Celtic Faerie,” are available for purchase through Amazon.com, Barnes & Noble, and other retailers.

MY SPOUSE, MY FRIEND - Educator and counselor Ingiete Oyama writes from a faith perspective to give a crash course on marital… Nov 4, 2022

'I Forgot to Love Her' is a New urban romance novel by author Kenesha Collins Jan 15, 2021