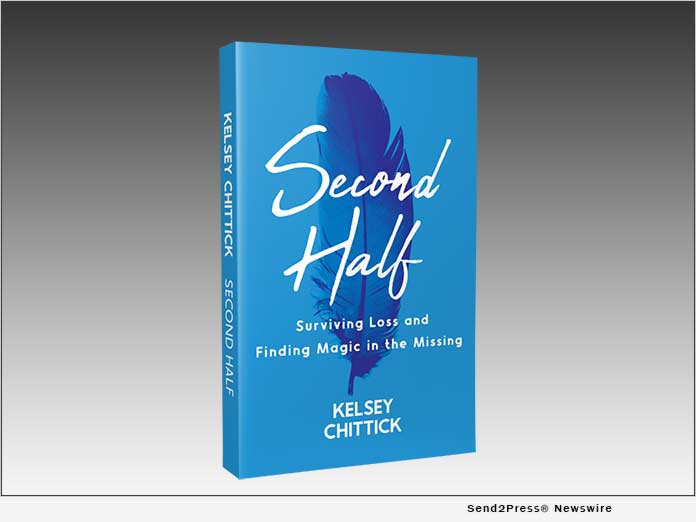 (LOS ANGELES, Calif.) — NEWS: Legacy Launch Pad Publishing is releasing the first book by writer and comedian Kelsey Chittick. The hilarious and moving memoir, “Second Half: Surviving Loss and Finding Magic in the Missing” (ISBN: 978-1951407445), documents her experience losing her husband, NFL football player Nate Hobgood-Chittick, when he was 42 and then navigating love, loss and widowhood while raising two children.

Hobgood-Chittick, who played for the New York Giants, Indianapolis Colts and San Francisco 49ers, among other teams, was part of the team that won Super Bowl XXXIV. His sudden heart attack devasted not only the loving family he left in his wake but also the legions of friends and fans who’d been impacted by his infectious spirit.

“Second Half: Surviving Loss and Finding Magic in the Missing” follows Kelsey Chittick’s journey from grief-stricken mother to advocate for joy no matter the circumstances. Simultaneously laugh out loud hilarious and deeply heartbreaking, Chittick’s memoir serves as a guide not only for anyone navigating loss but for anyone who needs a reminder that happiness can come in the most surprising places.

“It feels a little inappropriate to admit this about a memoir about losing your husband but I howled with laughter on almost every page of this book,” says publisher Anna David. “Kelsey has a gift I’ve never seen before of weaving hilarity into tragedy. She’s pretty much who I want to be when I grow up, even though I’m older than her.”

“Second Half: Surviving Loss and Finding Magic in the Missing” is available on Amazon and Barnes & Noble, among many other outlets.

A boutique publishing company primarily for entrepreneurs who are the leaders in their field, Legacy Launch Pad has published authors from the entertainment world, including KTLA anchor Courtney Friel and Real Housewives of New Jersey star Joe Gorga, in addition to government sales expert Gene Moran, Magic Johnson agent Darren Prince and franchise expert Tim Conn, among many others.