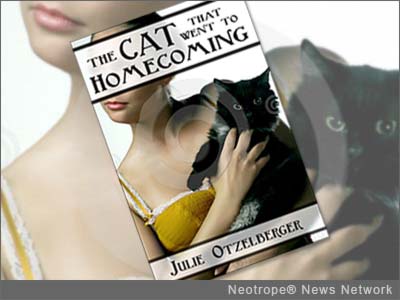 MILWAUKEE, Wis. /eNewsChannels/ — NEWS: In her new novel, Julie Otzelberger shows the bully what it’s like to be on the other side, while showing the victim how to overcome obstacles through volunteer work. “The Cat That Went To Homecoming” (ISBN: 9781612358215; paper) published by Fire and Ice Young Adult Books, is now available on Amazon as a Kindle edition, and on Lulu in both paperback and ebook (PDF) on February 24, 2014.

“The Cat That Went To Homecoming” is the coming of age story of Ellen Jones, an overweight teenage girl from a single family home. She is under constant attack by her peers, bullied because of her weight and her family’s poverty. Through volunteer work with her cat, Hershey, Ellen finds her self esteem and the courage to stand up to her bullies. Along the way, she discovers what true friendship and forgiveness are and tells us how Hershey became “The Cat That Went To Homecoming.”

Mrs. Otzelberger’s goals in writing this novel were to create awareness of teen bullying and to show young adults how they can benefit from volunteerism. The author herself is a registered handler with Pet Partners, and she and her cat Bear underwent the same training and testing as Ellen and Hershey do in the novel.

Julie Otzelberger is grew up in Hartland Wisconsin and has been a Milwaukee area resident since her high school years. She is no stranger to bullying, having been bullied for most of her school years. The comments classmates made still haunted her after thirty years. In an effort to overcome her self esteem issues, Mrs. Otzelberger underwent gastric bypass surgery in 2010.

The unconditional love that pets offer can heal almost any pain. Gastric Bypass surgery changed Mrs. Otzelberger’s appearance, but it could not heal the scars of bullying. The work she does with her therapy cat, Bear, gave her the self esteem she was lacking.

Julie Otzelberger has been married to her husband for 17 years, and their daughter still lives at home while attending college. They have four cats and one dog-several of her coworkers refer to her home as “Noah’s Ark”

“Hershey is a combination of each cat God has blessed me with over the years,” says Otzelberger. “My life was similar to Ellen’s, but I did not find anything like Pet Partners until very recently. I hope I help a young girl finds her way to Pet Partners and follow her altruistic path with her best friend.”

Find the book on Amazon at: http://amzn.com/B00ILZXLOI – or on Lulu at: http://www.lulu.com/shop/julie-otzelberger/the-cat-that-went-to-homecoming/paperback/product-21467193.html .

New Book, 'When Every Bite Matters: One Teen's Journey with Food Allergies' by Olivier Deldicque

Her Next Play Announces 2019 Sports Summit for Teen Girls at Life Time Sport in Eagan, Minnesota