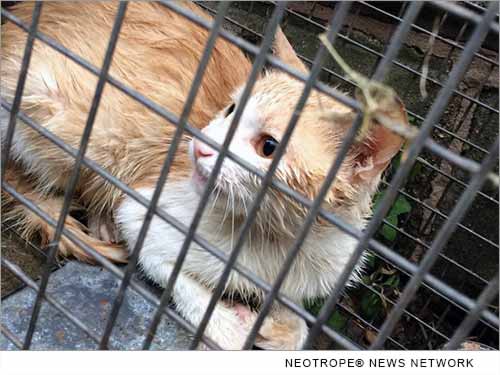 PITTSBURGH, Pa. /eNewsChannels/ — NEWS: According to Frankie’s Friends Cat Rescue, neighbors and concerned citizens are appalled that an Allegheny County Humane Officer who was called to investigate the abuse and abandonment of over 70 cats, removed two cats and allegedly sent the rest to die.

“It is an absolute breach of duty when an officer sworn to protect animals not only sends seventy-two cats to their deaths without a proper veterinary evaluation, but in doing so, also destroys any chance of successfully prosecuting a person who will likely subject animals to abuse at her next address,” said Dr. Becky L. Morrow, Founder of Frankie’s Friends Cat Rescue and expert witness in the Tiger Ranch institutionalized hoarding case.

Kathy Hecker, a Humane Officer working for the largest “No-Kill” shelter in Pittsburgh, investigated a call for hoarding and abandonment of a large number of cats in a Mt. Lebanon, Pa. house. The cats were found in unsanitary conditions and without food and water; abandoned after the tenant, Jennifer Fix, was evicted.

Hecker took two cats and allegedly “refused to take any of the other cats because most of them were too sick or too wild to be saved,” according to Big Daddy Wildlife Removal, the agency contracted to trap and kill the remaining cats. Seventy-two cats were removed and destroyed, while neighbors were allegedly told they were going to the “No-Kill” shelter. An additional five kittens and two adult cats were taken to the shelter due to pressure by neighbors.

Cats that were able to be removed from traps prior to being taken by the wildlife exterminators were found to be in good health by a veterinarian. None of the 72 cats were evaluated by a veterinarian for health or temperament prior to their death. Although animal abandonment is considered a form of animal cruelty according to Pennsylvania law, Hecker has not yet filed charges against Fix, and is unlikely to do so since all of the cats that would be considered “evidence” have already been removed from the property.

Margo Cicci, a member of the Pittsburgh Feral Cat Movement, was involved in the rescue attempt for these cats. “When we first heard that a Humane Agent was involved, we were relieved, thinking that everything would be done correctly so that charges could be filed against the former tenant, and every effort would be made to save as many of these cats as possible. To find out that this is how the Humane Agent handled it is beyond devastating.”

Please contact Frankie’s Friends Cat Rescue at (724) 230-6485 for more information or to interview those involved in this case.

Frankie’s Friends Cat Rescue was formed in 2010, after a sanctuary was created for unadoptable cats rescued from the Tiger Ranch Cruelty Case. Frankie’s Friends is dedicated to relieving suffering caused by cruelty/neglect, disease, injury, and homelessness of cats, by providing shelter, low or no-cost veterinary care, and spaying and neutering thousands of cats annually.

Animal Care and Control Team of Philadelphia (ACCT Philly) Board of Directors names Aurora Velazquez as an Executive Director Oct 3, 2019