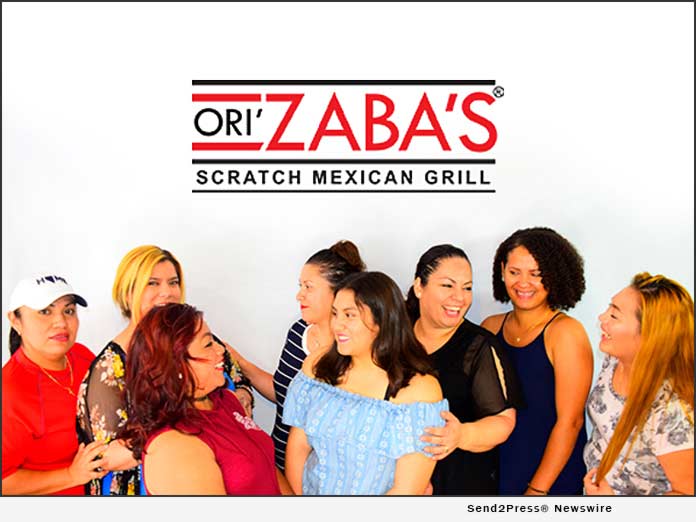 (LAS VEGAS, Nev.) — NEWS: Ori’Zaba’s, one of Las Vegas’s most popular scratch Mexican food franchises, has become a leading voice – and employer – for women who seek leadership roles in the restaurant industry.

The nineteen-year-old Mexican food franchise was founded by longtime Las Vegas restaurateur Kori McClurg, a military veteran and corporate executive, who understands the value women managers, employees and leaders bring to a company.

After serving in the United States Air Force and working as a defense contractor, Kori developed strong analytic and leadership skills, which she most recently put to work managing private investments and as an owner of Ori’Zaba’s Scratch Mexican Grill.

“As a woman, who has fought her way up in the military and also the corporate chain of command, I know the challenges women face in the workplace. That’s why Ori’Zaba’s stresses a culture that celebrates women leaders,” McClurg said.

The company actively engages in a hiring and promotional process that increases the number of talented women in leadership roles. More than 80 percent of the of Ori’Zaba’s Franchise General Managers are women. About 60 percent of the company’s executive team are women.

“Women make up the majority of the population and it’s about time companies and franchises reflect that reality and bring more women into all workplaces,” McClurg said.

“We wanted to enhance our culture, improve training, and reduce turnover. The people we have in our GM positions have been able to achieve that. I believe that is a testament to skills that are not traditionally thought of as strong leadership characteristics. When we start thinking about what actually impacts our business and the bottom line versus what makes a ‘strong’ leader, these women have been able to make a difference,” McClurg said.

In honor of International Women’s Day 2020, which takes place March 8, and to truly understand the significance of Ori’Zaba’s commitment, McClurg said it is important to highlight the history of the international women’s rights movement.

In that time, the women’s rights movement has celebrated many victories, including but not limited to:

* In 1948, the United Nations adopted the first international document to assert “the dignity and worth of the human person and [the] equal rights of men and women.”
* In 1979, the UN General Assembly adopted the Convention on the Elimination of All Forms of Discrimination Against Women.
* In 2017, the Women’s March on Washington, DC, became the largest international mass demonstration in support of women’s rights. Affiliated marches were held in Accra, Bangkok, Paris, Nairobi, Belgrade, Buenos Aires, Krakow, and even Antarctica.

Believe it or not, in 2019, there were still fewer women in leadership positions than there were men named John.

That figure seems astounding in light of research conducted by Harvard Business Review found that, “Women Score Higher Than Men in Most Leadership Skills.”

“As a woman who has served in the military and in the corporate world, I do understand the challenges that women face in the workplace. My intention has been to create a place where people can be successful right along with the company. Because of my experience, I have the objectivity to see what’s actually valuable versus the way things have always been done or who has always done them,” McClurg said.

There is no doubt that the healthy growth of Ori’Zaba’s franchise family, since its creation in 2001, is in great part due to these amazing energetic women leaders.

Ladies, on behalf of the whole Ori’Zaba’s franchise family – thank you!

Learn more about company at: https://zabas.com/

Ori'Zaba's Scratch Mexican Grill Invites Guests for A Limited Time to Hop on The Carolina Reaper Train with Their Spicy Salsa… Oct 19, 2020