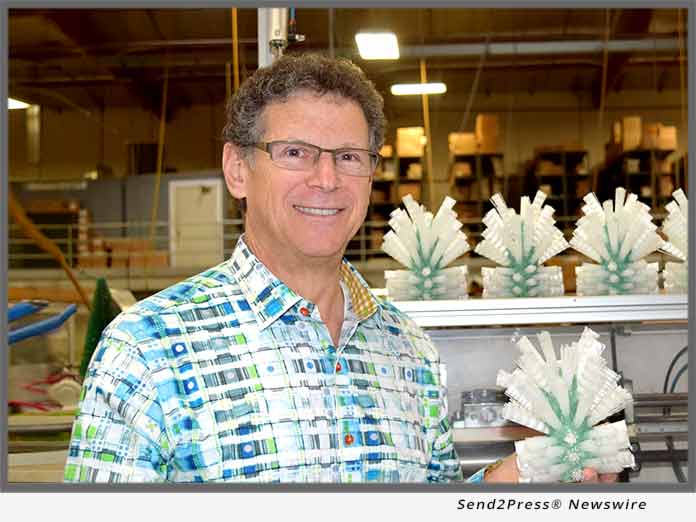 (LOS ANGELES, Calif.) — NEWS: Gordon Brush Mfg. Co., Inc. announced today that the Company is the 2018 winner of the MADE: In America Award. The award will be presented on July 3 on Capitol Hill in Washington, D.C., to company President and CEO Ken Rakusin (PICTURED ABOVE). The award will be presented by Congressman and Democratic House Whip, Steny Hoyer (MD-5), in the inaugural All American Room, making its national debut in the Rayburn House Office Building Foyer.

Gordon Brush(R) made the short list of U.S. manufacturers invited to compete for the 2018 award by Washington, D.C. headquartered nonprofit MADE: In America(TM). These companies have been identified and vetted for their best business practices placing them at the top of their respective industries. Each is required to make an in-depth submission detailing their commitment to ongoing manufacturing and job creation in the United States.

According to MADE: In America Chairman, James De Lorbe, “Gordon Brush is a truly singular company not only in its industry but in the United States. Mr. Rakusin’s leadership and track record in not only sustaining but growing a long-established company here in the United States throughout a turbulent period of ever increasing pressures to ship production overseas, represents a significant and exemplary contribution to our Nation deserving the highest order of recognition.”

“Winning the prestigious MADE: In America award is an amazing honor and accomplishment for Gordon Brush. Even under competitive threats. The Company has been steadfast in its philosophy and commitment to manufacturing in the United States,” said Rakusin. “In spite of many issues, I was determined to build and grow my business in the United States by re-investing profits into the purchase of millions of dollars in manufacturing equipment and machinery; pride in contributing to the American economy is near-and-dear to my heart.”

About MADE: In America:

MADE: In America is a 501(c)(3) educational non-profit based on Capitol Hill in Washington, D.C (https://www.madeinamerica-usa.org/). The organization’s mission is to create and foster a business climate conducive to the free exchange of ideas and information to revitalize and sustain the competitiveness of American commerce and industry in a global economy. MADE: In America is dedicated to increasing public awareness and educating Americans about the importance of a strong domestic manufacturing base.

Widely recognized for its leadership role and innovative best practices, MADE: In America is committed to accomplishing this goal by building coalitions of business leaders, public policy makers, and academia to analyze the complex global socioeconomic forces affecting American industry and to define and articulate a new and compelling case for American enterprise.

Gordon Brush Mfg. Co., Inc., is an ISO 9001:2015 certified American manufacturer of brooms and brushes. Established in 1951, Gordon Brush(R) has a rich history as a proud American brush manufacturer and includes two brands whose origin dates to 1855 and 1897. All told, the Company includes seven brands. Gordon Brush(R) manufactures the FootMate(R) System and over 17,000 standard and custom brushes, selling to a multitude of industries including: janitorial, medical, electronics, manufacturing, military, aerospace, and pharmaceutical in its state-of-the-art, 183,000 sq. ft. manufacturing facility in the City of Industry, Calif.

Gordon Brush Mfg. Co. Honored at the 2019 MADE IN AMERICA CONVENTION

Despite Pandemic, Avatar Construction Continues to Thrive with Rapid Expansion of Commercial Construction Services Across Northeast US