Dick Genthe Chevrolet recently announced it was giving local Detroit high schools the chance to win $10,000 by asking parents and teens to sign the Drive Safe Detroit, Teen Driver Pledge and obtain the most pledges; over 270 schools came aboard.

eNewsChannels NEWS: DETROIT, Mich. — Dick Genthe Chevrolet recently announced it was giving local Detroit high schools the chance to win $10,000 by asking parents and teens to sign the Drive Safe Detroit, Teen Driver Pledge and obtain the most pledges; over 270 schools came aboard. 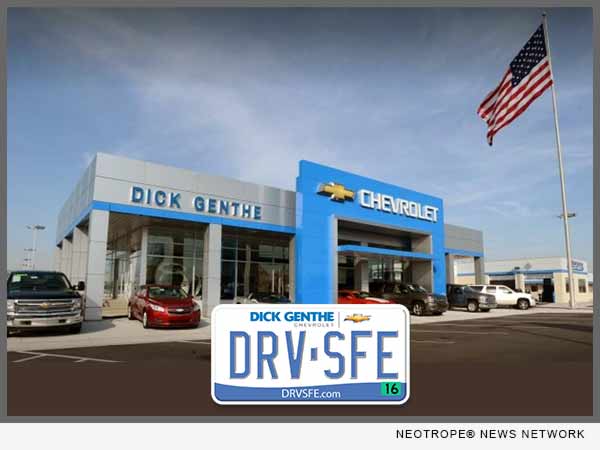 Since the start of the campaign in late December, over 1,000 teens, parents, and teachers have already pledged to support safe driving practices by take the Drive Safe Detroit, Teen Driver Pledge. Currently in the lead, is Airport Senior High School with 288 pledges followed by Lincoln Park High School with 264 pledges as of this week. Over 270 other schools have also begun pledging to show their dedication to safe driving and to helping their school.

Parents and teens are encouraged to visit http://www.DRVSFE.com/ to learn about the dangers of distracted driving and to take the Drive Safe Detroit, Teen Driver Pledge. As an incentive for families and school communities to get involved, Dick Genthe Chevrolet will donate $10,000 to the high school with the greatest participation through June 2, 2017.

“These days, teen drivers have more distractions than ever that increase their odds of harm on the road,” said Bruce Genthe, President at Dick Genthe Chevrolet. “We think it’s critical for teenagers, their parents and the community to have ongoing conversations about safe driving. We hope the Drive Safe Detroit Pledge campaign assists as a useful tool for parents to set high standards for and to place importance of safe driving practices. Ultimately, our goal through this campaign is to save lives and decrease harm done to our teenage drivers.”

The Genthe family has been serving the total automotive needs of the Downriver area for almost 90 years. Dick Genthe Chevrolet began operations in 1967, being founded by Richard E. Genthe. Richard S. Genthe, President, joined the organization in 1974 and later welcomed his son Bruce into the business in 2000 and his daughter Emily in 2003. The mission statement of the dealership was developed in 1995 and it still rings true today: “It is our mission to consistently and professionally deliver more than expected value with integrity and enthusiasm as a team.”