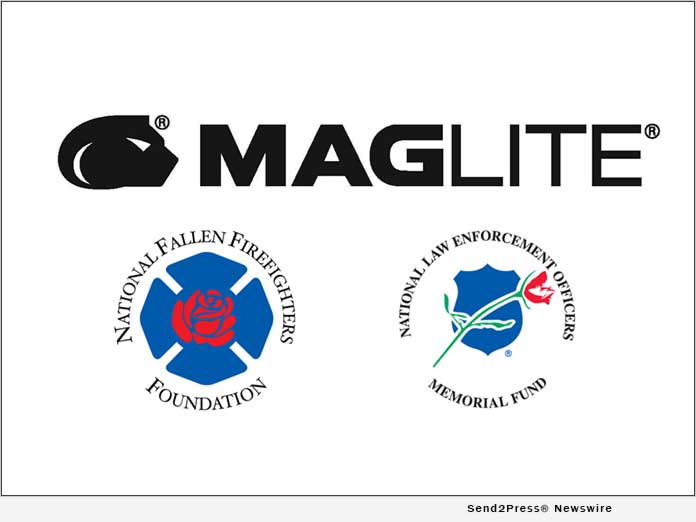 (ONTARIO, Calif.) — NEWS: The National Fallen Firefighters Foundation (NFFF), The National Law Enforcement Officers Memorial Fund (NLEOMF) and Mag Instrument, U.S. Manufacturer of the iconic MAGLITE(R) flashlight, have partnered with the Pedestrian Safety Institute (PSI) to drive awareness of the deadliest days of the year for pedestrian and traffic fatalities in the Month of July.

July has been designated National Roadside Traffic Safety Awareness Month because of the spike in accidents and fatalities during that time of year. According to the National Highway Traffic Safety Administration a pedestrian was killed every 88 minutes in 2017, now that number is even higher.

6,283 pedestrians were killed in 2018, an increase of 3.4 percent from the previous year and the highest number in 30 years. A research paper by noted economist and author Jay Prag of the Drucker School finds that pedestrian injuries and deaths from accidents cost the United States economy more than $60 billion in 2018 alone. The vast majority of accidents and the highest percentage of deaths (up to 75% according to some studies) occurred at night with poor visibility and distracted driving being major contributing factors.

“Pedestrian deaths exceed those by drowning and motorcycle accidents; exceed deaths by food borne illness in the US; and exceed deaths by tetanus, diphtheria, and whooping cough combined. They even exceed the combined deaths in home fires, boating accidents, and commercial airline accidents each year. If pedestrian deaths were a disease, drug companies would be searching for a cure,” said study author Jay Prag.

Roadway hazards abound for the first responder. Traffic volume and speed, distracted drivers and the additional distraction caused by a roadway incident leave firefighters and others working the scene highly vulnerable. As of June 8, 2020, 20 first responders have been struck and killed while working vehicle incidents this year. Dozens more have been injured, with an even higher number of near misses predicted to be occurring daily.

“The National Fallen Firefighters Foundation joins with other agencies in calling for all drivers to remain attentive, slow down when approaching an incident on the roadway and safely move over to give first responders the best opportunity to do their work and return home to their families,” said Chief Ronald J. Siarnicki, Executive Director of the NFFF.

“Maglite is committed to safety and security and make our products with those reasons in mind. We urge people to stay safe and be particularly vigilant around this deadly time of year and of course – carry some form of illumination at night,” said Tony Maglica, Founder and CEO Mag Instrument, Inc. “Our goal is to reduce fatalities and injuries that occur on our roads and highways in vehicle traffic accidents, especially among pedestrians, who are far likelier to be fatally struck by vehicles at night than in the daytime.”

The mission of the National Law Enforcement Officers Memorial and Museum is to honor the fallen, tell the story of American law Enforcement, and make it safer for those who serve. Traffic safety for our officers is closely tied to pedestrian safety, and it is a priority to bring awareness of the topic to the nation. We are honored to be a partner in National Traffic Safety Awareness Month,” said Marcia Ferranto, CEO of the National Law Enforcement Officers Memorial Fund.

MAGLITE(R) is a founding sponsor of The Pedestrian Safety Institute and sponsored the research by Prag. The full research paper is available at the website: https://www.pedestriansafetyinstitute.com/.

Mag Instrument, manufacturer of the MAGLITE(R) flashlight, is proud to be a U.S.A. manufacturer. Each flashlight is a result of an obsession with fine engineering, craftsmanship and a commitment to perfection. Founder, owner and president Anthony Maglica has guided his company’s growth from a one-man machine shop in 1955 to an enterprise that has proudly employed thousands of American workers since it produced its first flashlight in 1979. For more visit: https://maglite.com/.

About the National Fallen Firefighters Foundation:

The United States Congress created the National Fallen Firefighters Foundation to lead a nationwide effort to remember America’s fallen firefighters. Since 1992, the nonprofit Foundation has developed and expanded programs to honor fallen fire heroes and assist their families and co-workers. The Foundation also works closely with the U.S. Fire Administration to help prevent and reduce line-of-duty deaths and injuries. For more information on the NFFF and its programs, visit https://www.firehero.org/