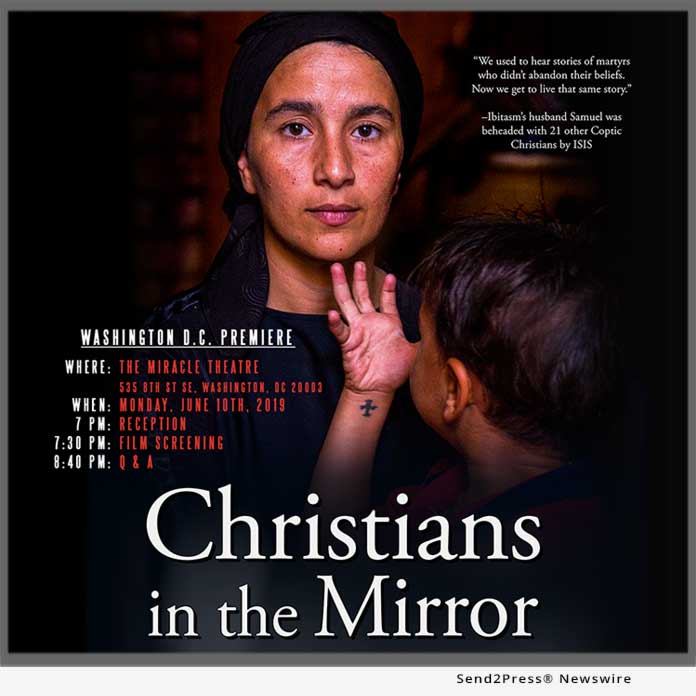 Premieres Monday, June 10 at the Miracle Theatre in Washington DC

(WASHINGTON D.C.) — NEWS: “Christians in the Mirror: Stories of Courage and Faith in the Face of Persecution From Syria, Iraq, India, Sudan and Egypt” will premiere Monday, June 10 at the Miracle Theatre in Washington D.C. from 7 to 9:30 p.m. Joshuacord, a non-profit 501(c)(3) organization, is honored to share with the community this one-of-a-kind film that reveals the intense suffering of persecuted Christians in the Middle East, Asia and Africa. Tickets are selling fast.

The Center for the Study of Global Christianity reported that an average of 90,000 Christians are martyred annually, while close to 215 million are persecuted for their faith. So, while U.S. citizens are blessed to experience religious freedom, Christian persecution continues to grow stronger across the world with each day that passes.

Joshuacord is a nondenominational organization that’s dedicated to raising awareness and providing support to the oppressed and persecuted Christians around the world. It’s teamed up with film director Jordan Allott, the founder of In Altum Productions; and Paul Jallo, of Jallo Oil Distributors, who is also one of the executive producers, to create “Christians in the Mirror.”

Patrick Carberry, founder Joshuacord, witnessed firsthand the persecution of religious minority Christians during his time working with the government in the Middle East. It was then that he realized he had to do something to help. This led to the founding of Joshuacord and the creation of “Christians in the Mirror.”

“From the demolished streets of Aleppo, Syria and northern Iraq, to rural villages in India, South Sudan and Egypt, what stood out to me the most during my travels filming ‘Christians in the Mirror,’ was not just the unbelievable persecution these Christian communities endured, but the inspiring faith and fortitude they displayed in the face of all that devastation,” Allott says.

Allott has filmed projects in more than 25 countries with themes ranging from Catholic Spirituality and mountain climbing to international human rights and American politics. One of his previous films, “Our Last Stand” was screened all over the world and in several European parliaments.

“Christians in the Mirror” is an expository documentary that is a provocation for Christians to look into their “Christian mirror” as a disciple of Christ and to see what the reflection brings to light. It’s the hope of this documentary’s makers and producers that the film will not only evoke sympathy and compassion, but inspire action.

“The persecution of Christians, is not just a Christian faith issue, it’s also a human rights issue and we should all be concerned and act to help those in need,” Carberry says. “My wish is that this documentary will bring awareness to these injustices.”

This Washington, D.C. premiere will serve as a springboard for screenings across the nation. Interested parties should visit the website to find out how they can bring the film to their area.

For more information about the documentary: http://christiansinthemirror.com/

'Christians in the Mirror,' a first-of-its-kind independent documentary, now on PRIME Video Dec 3, 2019