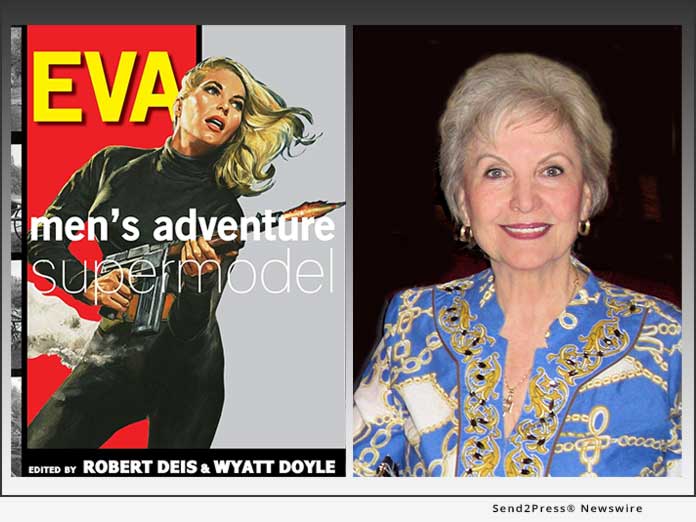 Showcased are hundreds of glamour photos, paperback and magazine covers and interior illustrations Eva modeled for in the 1950s, 1960s and 1970s. It tells the colorful story of Eva’s life and career in her own words. It also includes many previously unpublished photos from Lynd’s personal archive.

A 40-page preview of the book is available on Issuu.com at http://bit.ly/2Oss1kM.

In the 1950s, 1960s and 1970s, Eva Lynd’s image was seen by millions of American men and women in TV shows, plays and movies, on the covers of men’s magazines and women’s romance and confession magazines, in paperback cover paintings, and in the wild cover and interior illustrations used by men’s adventure magazines (MAMs).

By age 16, she was winning beauty queen contests. Soon, under the stage name Eva Lynd, she was appearing in popular TV shows produced in New York, such as the Steve Allen Show, Garry Moore Show, Perry Como Show and Jonathan Winters Show.

After moving to Hollywood in 1959, she appeared in various TV shows, including the “Thin Man,” “Peter Gunn,” “The Texan,” “Hogan’s Heroes,” “Desilu Playhouse,” “Bourbon Street Beat,” and “Cagney & Lacey.” She also had roles in several movies, including the 1960 cult horror movie “The Hypnotic Eye” and the 1975 caper film, “That Lady From Peking,” in which she co-starred with Carl Betz, Nancy Kwan and Bobby Rydell.

One of Eva’s most-seen roles was as the sexy woman who emerges from the tube in Brylcreem’s 1964 “Girl the Tube” TV commercial (https://youtu.be/gC4y5ubsWSI), which Entertainment Magazine named of the “50 Best Commercials of All Time.”

In the ’50s and ’60s, Eva was a popular model for pinup magazine photos taken by many top glamour photographers. She was also a go-to model for several top illustration artists who did cover paintings for paperbacks and cover and interior artwork for men’s adventure magazines.

In some MAM cover paintings and interior illustrations, Eva is a damsel-in-distress being tormented by Nazis, Commies or motorcycle gang members. In others, she is an alluring femme fatale or a gun-toting heroine.

Eva is now 82 and living in Hollywood with her husband of over 40 years, veteran actor Warren Munson. Eva and Warren both still act occasionally and sometimes work together, as they did in a recent Campbell’s Soup commercial in which they played grandparents.

Eva: Men’s Adventure Supermodel is available on Amazon in the US (https://amzn.to/2kCCD40) and worldwide, Barnes & Noble and other online booksellers, including The Book Depository site, which offers free shipping worldwide.

For more information or to arrange an interview with Eva Lynd, contact the co-editor of the book, Robert Deis (305-304-6494 email: cujokey@gmail.com or Waltona Manion 818-404-7271 waltona@waltonamanion.com.

Information can also be found online at: https://newtextureblog.blogspot.com/